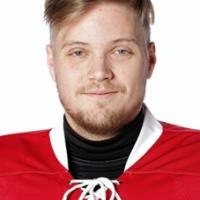 When and where did you begin this sport?
He took up the sport in 2008 in Moss, Norway.
Club / Team
Krakene Moss: Norway
Name of coach
Andre Lysenstoen [national], NOR
Preferred position / style / stance / technique
Goaltender

Most influential person in career
Coach Roger Hansen, and Norwegian Para ice hockey players Helge Bjornstad and Stig Tore Svee. (Athlete, 06 Mar 2018)
Hero / Idol
Canadian ice hockey player Wayne Gretzky, Czech ice hockey player Jaromir Jagr, Slovenian ice hockey player Anze Kopitar, Norwegian alpine skier Aksel Lund Svindal, Japanese ski jumper Noriaki Kasai. (Athlete, 06 Mar 2018; olympiatoppen.no. 01 Jan 2018)
Sporting philosophy / motto
"Play hard and smart." (Athlete, 10 Mar 2014)
Impairment
He was born with spina bifida. (Athlete, 06 Mar 2018)
Other information
POSITION SWITCH
In November 2021 he revealed he had switched from playing as a forward to goaltender. The previous month he had announced his retirement from competitive Para ice hockey due to health concerns, before discussions with coaches led to his change of position. "Hockey has been my hobby, lifestyle and motivation in hard times for the last 14 years and to get the message that time had come to an end was devastating. It's now 13 years since I first represented Norway, I'm still hungry for more and not close to feeling done. After what started as an emotional talk about reality with coaches and management a few weeks ago, the tables have turned and we found an opportunity we had to look into more. Now with the green light from doctors, the hospital and everything, it's finally time to announce my new path as a goalie." (Instagram profile, 28 Nov 2021, 31 Oct 2021)