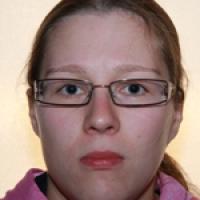 When and where did you begin this sport?
She took up skiing at age 14 in Finland. She began competing at an elite level in 2003 in Norway.
Why this sport?
Her younger sister encouraged her to try skiing, and she developed her own passion for biathlon.
Club / Team
Saloisten Salama: Raahe, FIN
Name of coach
Toni Myllyla [national]