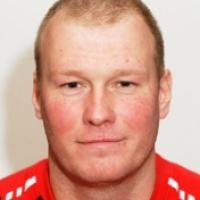 When and where did you begin this sport?
He began the sport in 2010 in Aleksin, Russia.
Why this sport?
He likes the physicality and the team aspect of the sport.
Club / Team
Phoenix: Russia
Name of coach
Sergey Samoylov [national], RUS; Nikolay Sharshukov [club], RUS
Preferred position / style / stance / technique
Defence

For his performance at the 2014 Paralympic Winter Games in Sochi, he was awarded the Order for Merits to the Fatherland [first grade] by the president of Russia. (kremlin.ru, 17 Mar 2014)
Impairment
His impairment is due to a childhood injury. (Athlete, 06 Mar 2014)