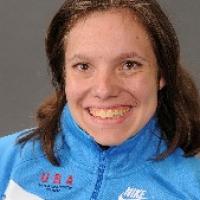 When and where did you begin this sport?
She began track and field age 14 at the Lakeshore Foundation in Birmingham, Alabama.
Why this sport?
She started wheelchair racing by chance. She played wheelchair basketball and was advised to try track in the off-season to keep in shape. She tried it and loved it.
Club / Team
Lakeshore Foundation: Birmingham, AL, USA
Training Regime
She trains on the track for 20 hours a week.

Hobbies
Sports, reading and hanging out with friends. (US Paralympics, 23 Feb 2010)
Awards and honours
She received Wheelchair and Ambulatory Sports USA's 2007 Spirit of Excellence Award for track and field and 2006 Spirit of Excellence Award for weightlifting. (wsusa, 2 Mar 2010)
Other sports
She is a member of the Lakeshore Foundation where she competes in a variety of sports including track and field, swimming, weightlifting, archery and table tennis. (usparalympics.org, 02 Dec 2010)
Ambitions
To become a kindergarten teacher. (US Paralympics, 2 Mar 2010)
To live life without regrets. (facebook.com, 02 Dec 2010)
Other information
COMMUNITY WORK
She has served as a mentor for young people at the Lakeshore Foundation, a charity for people with physical disabilities, and also served as a recruiter for disabled sports programmes. (US Paralympics, 02 Mar 2010)

DISCRIMINATION LAWSUIT
She brought a lawsuit against the Alabama High School Athletic Association in which she rallied to be able to participate alongside able-bodied athlete's and have her individual points count towards the teams total rather than compete in a separate wheelchair division. She was the only wheelchair athlete in her state in 2007 and said competing in her own division would make her an "exhibition" and affect her chances of receiving college scholarships and grants. The court found it unreasonable and unfair that she should have to compete in a division alone and she reached an agreement with the school to compete in a temporary 'combined division' where her points would count towards the team. (hackneypublications.com 06 Jul 2007)