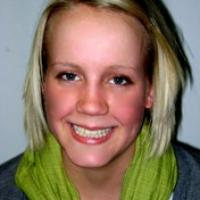 When and where did you begin this sport?
She began swimming at age seven. She took up Para swimming at age 18, just three months after she sustained her impairment.
Why this sport?
In April 2008 one of her sisters took her to the University of Minnesota to watch the US trials for the 2008 Paralympic Games in Beijing. She was inspired to get back into swimming by the athletes she saw there. She then went to her campus swimming pool and connected with a coach. "Within 48 hours [after the trials] I was back on the pool deck and returning to the water for the first time since my paralysis. I learned to adapt faster in the pool than on land. Swimming was as second nature as walking used to be."
Name of coach
Steve Van Dyne [personal]

Hobbies
Spending time with her husband, watching American football. (FINIS, Inc. YouTube channel, 26 Mar 2019)
Injuries
In June 2017 she underwent surgery to remove two muscles and a rib in her upper chest. Another muscle was removed in a second operation in December 2018. (olympics.nbcsports.com, 19 Dec 2018)

In March 2014 she suffered an arm injury after falling from a bench onto a shower floor which resulted in permanent nerve and muscle damage. The injury stopped her from competing at the 2014 Pan Pacific Championships in Pasadena, CA, United States of America. She returned to training in 2015 but the injury got worse after the 2016 Paralympic Games in Rio de Janeiro and she was out of action until September 2017. (people.com, 26 Feb 2021; olympics.nbcsports.com, 19 Dec 2018; swimmingworldmagazine.com, 18 Dec 2015; swimswam.com, 29 Jul 2014)
Sporting philosophy / motto
"Sport has been a fundamental part of my identity since I was a child, but in 2008 following my paralysis, it brought me back to life. My family and I were exposed to the Paralympic movement for the first time, and learned about adaptive sport. Since, I have seen the power that sport has to transcend the field of play and change perception of disability not only in our society, but for oneself. " (Facebook page, 11 Mar 2021)
Awards and honours
In 2011 she won the ESPY award for Best Female Athlete with a Disability from sports broadcaster ESPN. (CNN, 12 Aug 2011)

In 2009 and 2010 she was named Female Disabled Swimmer of the Year by Swimming World Magazine. (teamusa.org, 01 Dec 2013)
Ambitions
To compete at the 2020 Paralympic Games in Tokyo. (malloryweggemannusa.com, 24 Apr 2019)
Impairment
In January 2008 she received a series of epidural injections in her back to treat shingles. After the third injection she lost movement from the waist down. "I competed in high school [swimming] all four years, swam varsity and was captain senior year. After high school graduation is when my journey with the sport kind of took a shift following my paralysis. Getting into the water with a different body and dealing with learning how to balance my body from a buoyancy standpoint in the water, but then also propel myself without that kick that I relied on for so long, it was different, challenging, frustrating, but at the same time it was also liberating. For me a lot of my healing took place in the water." (zincagency.com, 01 Mar 2020; NowThis Her YouTube channel, 25 Jul 2019; startribune.com, 12 Nov 2009)
Other information
ENFORCED BREAK
She injured her arm in March 2014 and then experienced complications with the problem during the 2016 Paralympic Games in Rio de Janeiro. After one race finished her arm was blue and had no blood circulation. It led to a break from competitive swimming until September 2017. "One thing that I've constantly held onto is, as a Paralympic athlete, we're all in this sport because we've had to adapt. I mean, every single athlete in the Paralympic movement has what I'd call the war story. We've all had things happen in our lives, whether we were born with things or whether we acquired things later on. We all had circumstance. For me, that helped give me some sanity in a really, really difficult time. I just had to understand that, as my body changed, it heightened my paralysis, too. I was used to being paralysed with two strong arms. When I didn't have two strong arms anymore, my paralysis seemed worse to me. I have had a million reasons to give up, and I have had one reason to keep going, and that purely because I love to swim." (Twin Cities Orthopedics YouTube channel, 24 Jul 2019; olympics.nbcsports.com, 19 Dec 2018)

BOOK RELEASE
In March 2021 she released 'Limitless: The Power of Hope and Resilience', a memoir co-written by Tiffany Yecke Brooks. In the book, she details how she discovered the Paralympic movement and adaptive sport following her paralysis in 2008, and how she went on to become a Para swimmer. "It is hard to become what you do not see. That idea was very real for me following my paralysis, something that at times felt all-consuming as I tried to find a path forward. My book represents the culmination of giving that fateful day in 2008 meaning. This process of writing has given me the gift of time to process this journey, to honour it for all it has carried me through, and to know that we are all more than the circumstances we carry." (Facebook profile, 05 Mar 2021)

OTHER ACTIVITIES
In 2019 she became chief executive officer of TFA Group, a production studio that specialises in supporting brands and content related to the Para sports. She co-founded and began working as a speaker and writer at the agency in 2011, when it was previously known as The Factor Agency. "I think representation is a huge part of how we find our path forward. It's really hard to become what you can't see. Impairment is often not talked about. It's not something we bring up. It's not something you see in the mainstream media. When you tie women and the individuals impairment conversation together, it elevates that importance." She is also a published journalist and was a commentator for NBC's coverage of the 2018 Paralympic Winter Games in Pyeongchang. (LinkedIn profile, 11 Mar 2021; medium.com, 08 Mar 2021; NowThis Her YouTube channel, 25 Jul 2019)