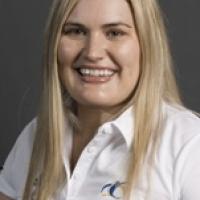 When and where did you begin this sport?
She started swimming as an infant and could already swim the length of the pool unaided at age two. She began competing in state championships at the age of six.
Why this sport?
She says she loves swimming because, living in Queensland, it's a great way to go out and enjoy the sunshine, get a tan and make friends.
Club / Team
Maroochydore Swimming Club: Australia
Training Regime
She trains six days per week, and estimates that she swims 576 kilometres in a year. Her training regime also includes handcycling, weights, massage and physiotherapy.

She was a finalist for Young Australian of the Year in 2001 and 2004. (marayke.com, 30 Dec 2009)
Other sports
She started competing in para-triathlons in 2009. She became Australia's first female medallist in the sport when she won bronze at the World Championships in Budapest, Hungary in September 2010. (sunshinecoastdaily.com.au, 15 Sep 2010)

She has competed in the sport of handcycling at a national level and won gold in the road race at the 2006 Australian Championships. (marayke.com.au, 30 Dec 2009)
Ambitions
To become a journalist when she stops competing. (marayke.com, 30 Dec 2009)
Impairment
She was involved in a car accident at the age of eight months, leaving her a paraplegic. (paralympic.org.au, 30 Dec 2009)
Other information
COMMUNITY WORK
In 2007 she used the money she received from winning Cosmopolitan magazine's Fun, Fearless, Female of the Year award to set up the organisation Sporting Dreams, a charity dedicated to helping athletes with disabilities achieve fun, fitness and personal development through sport. (sunshinecoastdaily.com.au, 30 Jun 2008)

MOTIVATIONAL SPEAKING
Her career as a motivational speaker has seen her visit schools, banks, and corporate events, with her talks incorporating her experiences as an elite athlete with a disability. (marayke.com, 30 Dec 2009)