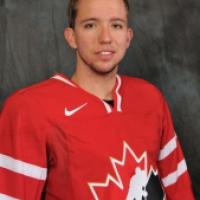 When and where did you begin this sport?
He began playing at age four at the Children's Hospital of Eastern Ontario in Canada, where doctors encouraged patients to play.
Why this sport?
"I love anything and everything that has to do with sledge hockey. I come from a big hockey background. My dad played Junior B hockey, my grandfather played Junior A. I like everything about the sport. I'm not a big boy, but I enjoy the physicality. I enjoy going into the corners, digging out that puck and coming out with it against a guy who's twice my size."
Name of coach
Ken Babey [national], CAN
Preferred position / style / stance / technique
Forward

Memorable sporting achievement
Winning a gold medal at the 2006 Paralympic Winter Games in Turin. (Athlete, 08 Mar 2014)
Most influential person in career
His parents, Canadian ice sledge hockey players Herve Lord, Jean Labonte and Todd Nicholson. (paralympic.ca, 19 Jan 2014; centre-ice.ca, 23 Mar 2013)
Hero / Idol
Canadian ice hockey players Roberto Luongo and Wayne Gretzky. (Athlete, 08 Mar 2014)
Sporting philosophy / motto
"I can't picture my life without sledge hockey. It means the world to me. Being able to travel and meet the people I have, and lived the experiences I have, has been truly incredible." (thesheaf.com, 2010)
Famous relatives
His father Roch has served as the equipment manager for the Canadian ice sledge hockey team. (canada.com, 01 Mar 2011)
Impairment
He was born with spina bifida, resulting in paralysis in his legs. (Athlete, 08 Mar 2014)