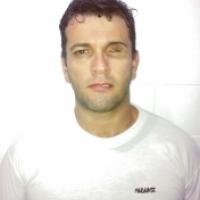 When and where did you begin this sport?
He took up Para athletics in 2011.
Why this sport?
In 2010 he became involved in sports for the vision impaired and began playing goalball. He switched to Para athletics the following year.
Club / Team
Instituto Athlon: São Paulo, BRA
Name of coach
Rene Da Costa Oliveira [personal]

Most influential person in career
His wife Sabrina Custodio. (globoesporte.globo.com, 27 Dec 2014)
Other sports
He has competed goalball. (institutopinheiro.org.br, 25 Jul 2016)
Famous relatives
His wife Sabrina Custodio has competed in Para triathlon and Para athletics at international level. (entretenimento.r7.com, 26 May 2015; revistasentidos.uol.com.br, 2011)
Impairment
In 2007 hot cooking oil splashed into his left eye while he was working as a chef, which resulted in loss of vision. Two years after the incident glaucoma caused him to lose his sight in his right eye. (maxpressnet.com.br, 26 Aug 2016)