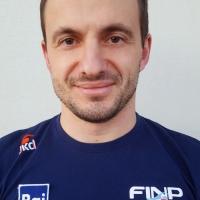 When and where did you begin this sport?
He learnt to swim as a child, spending his summers at the beach. He began Para swimming in 2012 after recovering from his accident.
Why this sport?
He started playing table tennis during his rehabilitation therapy but naturally wanted to get back into swimming, a sport he had enjoyed since childhood. "The passion for sport, especially at a competitive level, was pre-existing as I had been practising it for some time. Then it was a matter of pursuing the discipline in which I could give my best."
Club / Team
Briantea 84 [ITA] / Fiamme Oro [ITA]:
Name of coach
Alessandro Pezzani [club, national], ITA

Hero / Idol
Italian Para cyclist Alex Zanardi, Italian Para swimmer Federico Morlacchi. (huffingtonpost.it, 30 Dec 2017)
Awards and honours
He received the 2018 International Fair Play Award for Sport from the Italian Olympic Committee [CONI]. (finp.it, 13 Jul 2018)
Ambitions
To win a medal at the Paralympic Games. (Fanpage.it YouTube channel, 09 Dec 2017)
Impairment
He had a motorbike accident in 2011, which resulted in paraplegia. (gazzetta.it, 25 Feb 2015)
Other information
RETURNING TO SURGERY
Before his accident he worked as an orthopaedic surgeon at the Giovanni Bosco Hospital in Turin, Italy. Supported by the use of a custom wheelchair from Germany, he was able to return to work in the operating theatre once again. Later, he began using an exoskeleton that helps him perform surgery while standing. The skeleton, a vertical wheelchair, is moved by a joystick that he controls with his elbow while his hands carry out the operation. "My objective was to return to the surgery room on my feet. I just had to figure out how." (huffingtonpost.it, 30 Dec 2017; corriere.it, 07 Dec 2017; gazzetta.it, 25 Feb 2015; surgical-tribune.com, 19 Dec 2013)