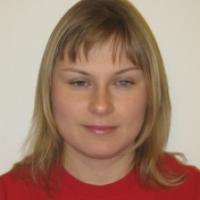 When and where did you begin this sport?
Her father taught her to ski at age seven in St. Petersburg, Russia. She stopped skiing for six years while she lived in Toronto, ON, Canada, until she began training and competing again in 2005.
Why this sport?
She became interested in skiing because of her mother.
Club / Team
Kanata Nordic: Ottawa, ON, CAN
Name of coach
Robin McKeever [national], CAN; Kaspar Wirz [national]
Handedness
Right

Nicknames
Rita (canadianathletesnow.ca, 01 Jan 2009)
Hobbies
Cross-country skiing, horse riding, reading, travelling, languages, being outdoors. (paralympic.ca, 11 Feb 2014)
Superstitions / Rituals / Beliefs
"Be the best that you can be." (Vancouver, 12 Feb 2010)
Other sports
She has competed in para-cross country skiing and biathlon. (SportsDeskOnline, 28 Feb 2014)
Famous relatives
Her mother Olga Nazarenko won gold and silver medals in para-Nordic skiing at the 1992 Paralympic Winter Games in Albertville. Her father Mikhail Gorbounov won gold and silver medals in para-athletics at the European championships. (cccski.com, 15 Mar 2011; paralympic.ca, 01 Mar 2010)
Impairment
She has aphakia, resulting in almost complete visual impairment. Both her parents are also visually impaired. (yourottawaregion.com, 26 Apr 2009)
Other information
OCCUPATION
She is a French-English translator for the Canadian government. (ca.sports.yahoo.com, 06 Mar 2014)

FROM RUSSIA TO CANADA
She moved with her family from St. Petersburg, Russia to Canada in 1999. Initially settling in Toronto in Ontario, the family moved to Ottawa in 2005. (paralympic.ca, 01 Mar 2010)