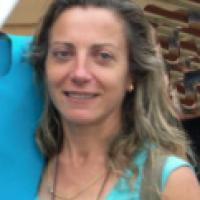 When and where did you begin this sport?
She took up athletics in 2005 at age 42.
Why this sport?
After losing her vision, she was affected by depression and anxiety. Her husband used to run marathons and convinced her to try sport to overcome her difficulties.
Name of coach
Miguel Angel Torralba [national]

Injuries
She competed at the 2019 World Marathon Championships in London, England, with a hamstring injury and was later forced to undergo surgery. (dxtadaptado.com, 01 Aug 2021)
Sporting philosophy / motto
"Dreams come true if you feed them daily with passion, hard work and discipline." (Twitter profile, 05 Jun 2016)
Awards and honours
She was flag bearer for Spain at the opening ceremony of the 2018 European Championships in Berlin, Germany. (IPC, 20 Aug 2018)
Famous relatives
Her husband Lorenzo Sanchez has served as her guide, and also played handball in the Spanish second division. (dxtadaptado.com, 01 Aug 2021)
Ambitions
To win a medal at the 2020 Paralympic Games in Tokyo. (dxtadaptado.com, 01 Aug 2021)
Impairment
In 2005, at age 42, she developed a degenerative macular condition, which severely limited her vision. (maricarmenparedesrio2016.blogspot.com.es, 08 Nov 2015)
Other information
HUSBAND AND GUIDE
Her husband Lorenzo Sanchez has served as her guide since 2011. She says having a guide fully committed to her is an advantage not many runners with visual impairments have. "Without him I would not have gotten anywhere. It is a great advantage as he plans my training, all the travelling and the meals. Many blind runners have to quit because they struggle to find a guide and I am so lucky to have one 100% by my side." (dxtadaptado.com, 01 Aug 2021)

INSPIRATION FROM RIO DISAPPOINTMENT
She says her disappointment at not finishing the T12 marathon at the 2016 Paralympic Games in Rio de Janeiro, the first time a women's T12 marathon was run at the Games, has pushed her to aim for a medal at the 2020 Games in Tokyo. "I owe this to myself. I was part of an historic moment but I had to abandon the race due to dehydration. It was the only time that I have had to abandon a race. I was so low because at the time my times were worthy of a medal. I thought I was reaching an end point, but I decided to go on until my body tells me to stop." (dxtadaptado.com, 01 Aug 2021)

FORMER OCCUPATION
Before losing her vision, she worked as a nurse at a hospital in Barcelona, Spain, for 25 years. (maricarmenparedesrio2016.blogspot.com.es, 08 Nov 2015)