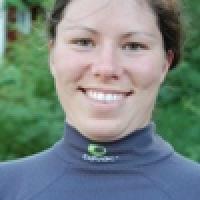 As one of Norway’s most prolific para-athletes, Marthinsen has achieved success at Paralympic Games in both swimming and cross-country skiing.

Splitting her time between training, competing and social work, the Norwegian competed at three summer Paralympic Games between 2004 and 2012. At Beijing 2008, Marthinsen won bronze in the 100m backstroke S8 and also medalled at the World Championships in 2006 in the same event.

Marthinsen, who had her right leg amputated at the age of two following a road traffic accident, was also the holder of 13 world records in the water between 2003 and 2007.

Her first Paralympic Winter Games experience came at Vancouver 2010, when she secured three top 10 finishes in the three events she entered.

From there, two years after she first tried skiing in 2008, Marthinsen began to focus increasingly on winter sport. Her determination paid off in the 2011-12 season, when she finished on top of the World Cup rankings in her first competitive season on snow, after winning seven World Cup races.

Since then Marthinsen has finished in the top three every season. Capping it all off, in the last two years, she became a Paralympic champion at Sochi 2014 and won her latest World Championships medals. Had it not been for her sit-ski breaking in the 5km race in Sochi which cost her a two second lead, Marthinsen was also in line for a second gold.

It is not known if Marthinsen will return to the pool anytime soon. But her success across summer and winter sports is rivalled by another sit-skier – the USA’s London 2012 rowing bronze medallist and cross-country Worlds podium finisher Oksana Masters. The pair will battle it out in 2015-16, with Masters looking to gain an edge as she prepares for the Rio 2016 Paralympic Games.

Memorable sporting achievement
Winning gold at the 2014 Paralympic Winter Games in Sochi. (paralympic.org, 09 Feb 2016)
Hero / Idol
Norwegian swimmer Alexander Dale Oen. (nettavisen.no, 12 Oct 2012)
Injuries
She was affected by a persistent shoulder injury for much of 2008. (h-avis.no, 03 Sep 2008)
Sporting philosophy / motto
"I know what's required, and then I go for it completely." (krik.no, 28 Mar 2012)
Awards and honours
She was Norway's flag bearer for the opening ceremony of the 2014 Paralympic Winter Games in Sochi. (paralympic.org, 07 Mar 2014)

She was the International Paralympic Committee [IPC] Athlete of the Month in February 2010. (paralympic.org, 01 Feb 2010)

She was named 2005 Disabled Athlete of the Year in Norway. (nrk.no, 04 Sep 2012)
Other sports
She competed in swimming for Norway at three Paralympic Games between 2004 and 2012. (aftenposten.no, 04 Sep 2012)
Impairment
Her right leg was amputated at age two after she was involved in a traffic accident. She also has difficulty using her right arm. (Vancouver 2010, 02 Dec 2011; h-avis.no, 03 Sep 2008)
Other information
RETIREMENT
She retired from competitive para-Nordic skiing in 2015. "I finished my professional sports career as a skier after season 2014/15. I'm not taking part in the World Cup anymore but I will participate in some national competitions just for fun, like the Ridderrennet, the Birkebeiner relay and the Norwegian Championship. I still love skiing, but now without the pressure to achieve good results." (paralympic.org, 09 Feb 2016)

EQUIPMENT FAILURE
During the 5km race at the 2014 Paralympic Winter Games in Sochi, her sit-ski broke, causing her to lose her two second lead and miss out on a medal. (paralympic.org, 31 Aug 2014)