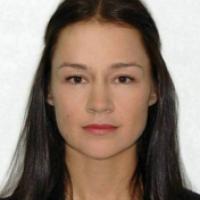 When and where did you begin this sport?
She began the sport in 2007 in Chusovoy, Russian Federation.
Why this sport?
She learned about the Russian Para alpine skiing team after attending a festival for people with impairments, and wanted to get involved.
Club / Team
Polazna Alpine Skiing School: Russia
Name of coach
Valery Ovsyannikov [personal], RUS

In 2014 she was named among the three Best Para Athletes in the Prikamye region of Russian Federation. (permnews.ru, 17 Dec 2014)
Ambitions
To compete at the 2018 Paralympic Winter Games in Pyeongchang. (Athlete, 11 Dec 2017)
Impairment
She was born without a right hand. (corp.megafon.ru, 2010)
Other information
FURTHER EDUCATION
She graduated in finance and economics from the National Research Polytechnic University in Perm, Russian Federation. (Athlete, 11 Dec 2017)