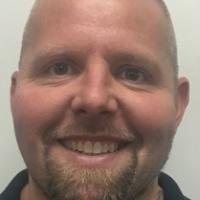 When and where did you begin this sport?
He took up Para athletics at age 36 in 2014, in Geelong, VIC, Australia.
Why this sport?
After injuring his leg while playing American football, he wanted to remain active in sports. He decided to get in contact with the Australian Paralympic team's high performance manager Tim Matthews, who encouraged him to look into throwing events. "After I was injured, I looked for a sport that I could focus on rather than focusing on the injury. Para sport was to be the driving force for me to move on and start a new chapter in my life."
Club / Team
Athletics Chilwell: Geelong, VIC, AUS
Name of coach
John Eden [personal], NZL

Before starting his career in Para athletics, he required four arthroscopic interventions on his right knee and a left knee reconstruction, and also broke the little finger on his right hand. (Athlete, 06 Nov 2019)
Sporting philosophy / motto
"Train like a third string. Play like a king." (Athlete, 06 Nov 2019)
Awards and honours
In 2020 he won the John Landy Award for athletic excellence, distinction of character, and sportsmanship at the Athletics Chilwell club in Geelong, VIC, Australia. (Facebook profile, 19 Dec 2020)

In 2016 he received the Lee Troop Award for Excellence from the Barwon Sports Academy in Australia. (geelongadvertiser.com.au, 05 Dec 2016)
Other sports
He has represented Australia in both Para athletics and Para ice hockey. Prior to his accident he played American football for the Geelong Buccaneers in Victoria, Australia. (SportsDeskOnline, 29 Jan 2019; geelongadvertiser.com.au, 08 Jun 2017)
Ambitions
To compete in athletics at the Paralympic Games, and to represent Australia in ice hockey at the 2022 Paralympic Winter Games in Beijing. (Athlete, 06 Nov 2019; freelocalnews.com.au, 26 Apr 2018)
Impairment
He has no feeling below his left knee after he was injured in a tackle while playing American football in 2013. (Athlete, 06 Nov 2019; athletics.com.au, 01 Jan 2017; geelongadvertiser.com.au, 05 Dec 2016)
Other information
JAVELIN FOR TOKYO
He had to turn his focus to javelin in the lead-up to the 2020 Paralympic Games in Tokyo because his primary event, the men's F38 shot put, is not part of the programme in Tokyo. "Unfortunately our event isn't there. But I'll make the transition to javelin. It will be a big task but at a minimum, I can push the guys in front of me. I see that as a part I can play in helping Australia do well in Japan." (smh.com.au, 12 Nov 2019)

PARA ICE HOCKEY
He took up Para ice hockey in 2017 and became a member of the Australia Para ice hockey team that debuted at the 2018 World Championships in Finland. "I came from American football and just missed team sports, so it's just fantastic to be in that team environment again. [I] thought I would go and give it a crack as I love full-contact team sports. [I] fell in love with the game straight away." (World Para Ice Hockey Facebook page, 08 Nov 2018; Australian Para Ice Hockey Association Facebook page, 20 Oct 2018; paralympic.org.au, 25 Sep 2018)

OCCUPATION
In 2020 he began working as a throwing coach at the Athletics Chilwell club in Geelong, VIC, Australia. He has also worked as a tree surgeon, and has a diploma in arboriculture from ArborTrim Australia. (Facebook profile, 21 Feb 2021; Athlete, 06 Nov 2019; Australian Para Ice Hockey Association Facebook page, 20 Oct 2018; athletics.com.au, 01 Jan 2017)