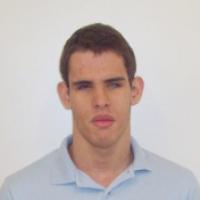 When and where did you begin this sport?
He began swimming at age three in Brusque, Brazil. He took up Para swimming in 2006.
Why this sport?
Doctors advised him to take up swimming to help with a bronchitis issue he had developed from birth.
Club / Team
Nauru Brasilia: Brazil
Name of coach
Marcelo Hiroshi Sugimori [personal]

In 2015 he was diagnosed with hypothyroidism after becoming unusually tired after training. (municipiomais.com.br, 11 Feb 2015)
Sporting philosophy / motto
"Sport brings life." (Athlete, 19 Jul 2015)
Impairment
He was born with retinopathy of prematurity. The vision impairment affects some babies that are born prematurely. (cpb.org.br, 01 Jun 2019; vavel.com, 23 Dec 2017)
Other information
DOCUMENTARY
A documentary of his journey to the 2016 Paralympic Games in Rio de Janeiro was released in August 2016 called 'Do Outro Lado: A Conquista de Matheus Rheine' [On the Other Side: The Conquest of Matheus Rheine]. (omunicipio.com.br, 21 Sep 2016; espn.com.br, 29 Aug 2016; imdb.com, 24 Aug 2016)