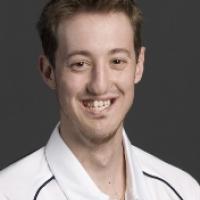 When and where did you begin this sport?
He began the sport in 2005.
Club / Team
QEII Track Club: Brisbane, QLD, AUS
Name of coach
Andrew Dawes [national]

He participated in the torch relay for the 2000 Olympic Games in Sydney. (paralympic.org.au, 15 Apr 2011)
Other sports
He has also represented Australia in wheelchair basketball and para-swimming. (athletics.com.au, 24 May 2011)
Impairment
He was born with popliteal web syndrome, a rare physical impairment that prevents him from standing up and has seen him undergo 25 operations. (paralympic.org.au, 15 Apr 2011; Facebook page, 15 Sep 2015)
Other information
OCCUPATION
He works as a sports administrator at the Australian Catholic University in Sydney, NSW, Australia. (Facebook profile, 07 Mar 2016)

OTHER STUDIES
He has studied at Griffith University in Nathan, QLD, Australia. (griffith.edu.au, 29 Oct 2015)