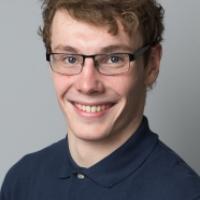 When and where did you begin this sport?
He took up swimming at age eight.
Why this sport?
Following the removal of a tumour from his leg, doctors strongly recommended he take lessons as part of his rehabilitation. It was hoped swimming regularly would help correct his different leg lengths and the way he walked.

Nicknames
Matt (sunderlandecho.com, 10 Apr 2014)
Injuries
He required a number of operations between 2004 and 2007 after a tumour was discovered on his leg. (thefreelibrary.com, 16 Dec 2010)
Awards and honours
He was named Member of the Most Excellent Order of the British Empire [MBE] in the 2017 New Year's Honours list. (bbc.com, 31 Dec 2016)

He received the Andy Neal Award at the 2016 Sunderland Young Achievers Awards in England. The honour is given to the overall winner at the event. (sunderlandecho.com, 12 Mar 2016)

He received the 2015 Paralympian of the Year award from the Sunderland Sports Fund. (sunderlandecho.com, 12 Mar 2016)

He was named Para Athlete of the Year at the 2015 Sunderland Sports Awards. (cityofsunderlandasc.co.uk, 04 Jun 2015)

He was named Male Personality of the Year at the 2015 North East Disability Sports Awards in England. (itv.com, 18 Feb 2015)

He was named Young Male Achiever of the Year at the 2011 North East Disability Sports Awards. (countydurhamsport.com, 22 Feb 2012)
Impairment
He has cerebral palsy. (letsgosunderland.com, 08 Mar 2012)
Other information
RETIREMENT
He retired from competitive swimming in June 2018 after he was reclassified from S9 to S10. (bbc.co.uk, 24 Apr 2019)