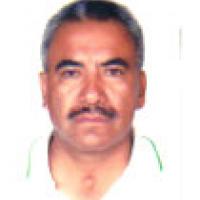 When and where did you begin this sport?
He took up athletics at age 17 with the IMSS [Mexican Social Security Institute].
Why this sport?
He likes the effort he makes every day to reach his goals, and enjoys receiving the recognition of the people that believe in him.
Training Regime
He trains four hours every day. He does gym work three days a week and trains at the Mexican Paralympic Centre.

Hero / Idol
Mexican para-swimmers Juan Ignacio Reyes and Christopher Tronco, and Mexican para-athlete Leticia Aleman. (discapacinet.gob.mx, 06 Jun 2007)
Sporting philosophy / motto
"My disability has never been an obstacle." (jornada.unam.mx, 16 Nov 2010)
Awards and honours
He won the 2010 National Sports Award [Premio Nacional del Deporte], given by the government to the best athletes in Mexico. With the award, he was given 549,000 Mexican pesos [about 50,000 USD]. (sdpnoticias.com, 10 Nov 2010)
Impairment
At age 15 he was diagnosed with Guillain-Barre syndrome, an autoimmune disorder which affects the peripheral nervous system. "When I got sick, my body was paralysed entirely. I remember I could not breathe and I had to have a tracheotomy. After that it got even worse and I spent 13 days in a coma." (dis-capacidad.com, 16 Nov 2010)
Other information
HIS LUCKY ARM
He believes his right arm is lucky, as he nearly had to have it amputated. "I was born as a premature seven-month baby and I had to stay in an incubator for two months. Due to carelessness, my right arm got burned. Luckily it wasn't that bad, but 14 years later the tendons were affected and I lost my ability to move that arm. I got really close to losing the arm with which I make my throws." (dis-capacidad.com, 16 Nov 2010)