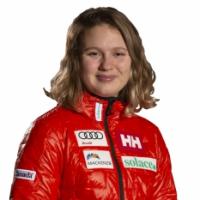 Residence
Victoria, BC, CAN
Languages
English

When and where did you begin this sport?
She began skiing at age seven in Canada
Why this sport?
"I loved skiing and someone introduced me to racing. I became hooked on the speed."
Club / Team
British Columbia Para Alpine Ski Team [BCPAST]: Whistler, BC, CAN
Name of coach
Lasse Ericsson

She took part in the ceremonial flag procession ahead of the 2015 Canada Winter Games in Prince George, BC, Canada. (bcgames.org, 17 Oct 2014)
Other sports
She has competed in Para cycling at provincial level in British Columbia, Canada. (sirc.ca, 14 Oct 2015)
Ambitions
To compete in cycling at the 2020 Paralympic Games in Tokyo. (timescolonist.com, 19 Mar 2018; shaw.ca, 16 Nov 2015)
Impairment
She has cerebral palsy following complications at birth, which predominantly affects the coordination of her right hand. (saanichnews.com, 26 Feb 2018; NPC Media Guide, 2018; shaw.ca, 16 Nov 2015)
Other information
FROM GREAT BRITAIN TO CANADA
Born in Great Britain, in 2009 she moved to Vancouver Island, BC, Canada. (shaw.ca, 16 Nov 2015)