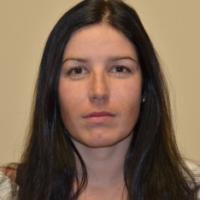 When and where did you begin this sport?
She first tried skiing at age five, and was introduced to Para alpine skiing at age 16.
Why this sport?
"When I was five my mother put me on skis, she gave me the passion for snow and skiing. In 2004 she took my brother to a race in Val di Fiemme and discovered there were also Paralympic competitions, so I started racing on the circuit."
Name of coach
Davide Gros [national], ITA

During a practice run at the 2014 World Cup event in Panorama, BC, Canada, she fractured her left collarbone and was unable to compete at the event. (comitatoparalimpico.it, 13 Jan 2014)

In November 2012 she suffered an injury to the cruciate ligament in her knee. She underwent surgery on the injury in March 2013, and began skiing again in July 2013. (superabile.it, 26 Nov 2013; italian.ruvr.ru, 15 Mar 2013)
Sporting philosophy / motto
"I look at what I have and not at what I am missing. I have always enjoyed challenges since I was a child." (ildolomiti.it, 09 Oct 2017)
Awards and honours
In January 2017 she received a commemorative plaque from the mayor of Ville d'Anaunia, Italy, in recognition of the commitment and perseverance she has showed in her career. (ansa.it, 03 Jan 2017)

She was Italy's flag bearer during the opening ceremony of the 2006 Paralympic Winter Games in Turin. (Athlete, 10 Mar 2014)
Impairment
She was born without her left arm. (redbull.com, 15 Jan 2016)
Other information
BIONIC ARM
In July 2017 she used for the first time a bionic arm, a prosthesis that integrates with her muscles and nervous system. “I am still a beginner, but this is a great honour and hope. For the first time I will have the opportunity to try and live with both hands.” She had tried a prosthetic arm as a child, but she discontinued its use because she found it very uncomfortable. (ognisportoltre.it, 21 Dec 2017; Facebook profile, 23 Jul 2017; giornaletrentino.it, 23 Jul 2017)