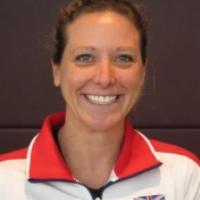 When and where did you begin this sport?
She took up the sport in May 2011.
Why this sport?
She became involved in athletics after attending an open day in Leeds, England.
Club / Team
Coventry Godiva Harriers: England
Name of coach
Job King [club], GBR; Paula Dunn [national], GBR
Training Regime
She trains five days per week.

Nicknames
Mel (melnicholls.co.uk, 20 Aug 2012)
Injuries
She suffered a shoulder injury in 2013. (athleticsweekly.com, 26 Oct 2014)
Sporting philosophy / motto
"Dream big." (Facebook page, 30 Jul 2014)
Other sports
She has also competed in para-dressage, wheelchair tennis and basketball competitions. (thisisbristol.co.uk, 23 Mar 2010)
Impairment
She was involved in traffic accident which left her with serious heart complications. From 2001 she had a series of strokes, the most recent of which in 2008 left her unable to use her left arm and leg. In April 2009 doctors discovered a hole in her heart and she had corrective surgery. (thisisgloucestershire.co.uk, 23 Aug 2012; paralympics.org.uk, 2012; thisisbristol.co.uk, 23 Mar 2010)
Other information
DOLLY MIXTURES
A local newspaper called upon its readers to help her raise funds for a new custom-built racing chair, which was named 'Dolly'. Her family and supporters refer to themselves as the 'Dolly Mixtures' and wear orange and pink when attending her races. (gloucestershireecho.co.uk, 13 Feb 2016; melnicholls.co.uk, 19 Apr 2014; thisisgloucestershire.co.uk, 23 Aug 2012)

FOUNDING MEMBER
She is a founding member of the Warwick Wheelchair Racing Academy in England, which was set up in July 2011. (warwick.ac.uk, 31 Jul 2011)