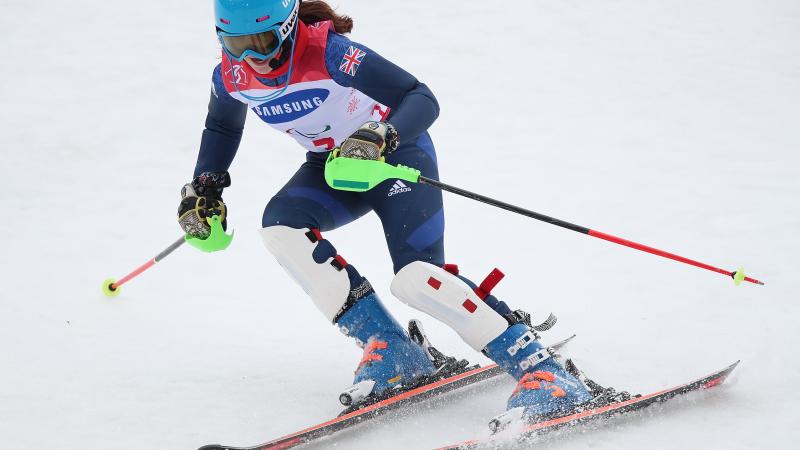 Menna Fitzpatrick became Great Britain's most decorated Winter Paralympian after a fantastic performance at her debut Games in PyeongChang, South Korea, in 2018.

The young alpine skier, guided by Jennifer Kehoe, took gold in the women’s slalom vision impaired, silver in the giant slalom and super-combined, and bronze in the super-G.

She also ended second in the overall World Cup standings.

One year before, she had taken bronze in giant slalom at her maiden World Championships in Tarvisio, Italy.

Fitzpatrick had impressed all season long, stealing multiple podiums on her debut season on the circuit. She edged out her US rival Danelle Umstead by just 10 points.

Her rapid rise has led to national acclaim.

Fitzpatrick received the 2016 Evie Pinching Award, given to an athlete aged 24 and under who is considered an emerging talent by the Ski Club of Great Britain.

The youngster is the latest vision impaired skier to come out of Great Britain, in addition to Millie Knight who stole the show at the 2015 World Championships with a silver and bronze in the giant slalom and slalom respectively.

When and where did you begin this sport?
She first tried the sport at age five while on holiday with her family in Les Gets, France.
Why this sport?
Her family used to go on skiing holidays and encouraged her to take up the sport. In October 2010 she was noticed by a coach at the Chill Factore in Manchester, England, and began training regularly with the British Para Snowsport team. "I loved the feeling of adrenaline running through my body."
Name of coach
Jo Ryding, GBR

She broke her hand after falling during super G training ahead of the 2016/17 season. She required surgery and was unable to train on the snow for eight weeks. (snowsportwales.co.uk, 24 Apr 2017; bbc.co.uk, 25 Jan 2017)
Sporting philosophy / motto
"I love going fast. It is the one thing I always want to be doing." (paralympic.org, 21 Jan 2017)
Awards and honours
In 2018 she was named Member of the Most Excellent Order of the British Empire. (paralympic.org, 11 Jun 2018)

In 2018 she was named Disability Sportswoman of the Year by British newspaper, The Sunday Times. (paralympic.org, 02 Nov 2018)

She was flag bearer for Great Britain at the closing ceremony of the 2018 Paralympic Winter Games in Pyeongchang. (gov.wales, 14 Feb 2019)

She became the first British Para alpine skier to have won gold at both the Paralympic Winter Games and the world championships. She claimed victory in slalom at the 2018 Paralympic Winter Games in Pyeongchang, and then triumphed in both downhill and super G at the 2019 World Championships in Slovenia and Italy. (SportsDeskOnline, 05 Feb 2019; paralympic.org, 31 Jan 2019)

In 2016 she became the first British alpine skier to win an overall vision impaired World Cup title. (snowsportwales.co.uk, 31 Mar 2016)
Famous relatives
Her mother represented Wales in badminton. (cheshireeast.gov.uk, 01 Mar 2018)
Ambitions
To win a gold medal at the 2022 Paralympic Winter Games in Beijing. (Instagram team profile, 14 Sep 2020)
Impairment
She was born with congenital retinal folds. She has no vision in her left eye and limited vision in her right eye. (mennaandjen.co.uk, 03 Nov 2017)
Other information
LATE GUIDE CHANGE
She partnered with guide Gary Smith for the 2022 Paralympic Winter Games in Beijing after her regular guide Katie Guest tested positive for COVID-19 ahead of the Games. "I've known Gary since he started as a guide in 2016. We used to sit next to each other at dinner, and he used to steal the rest of my food and leftovers. Since then, we've always got on really well and he's a great guide. I knew that he would stay nice and calm, do the comms for me and it's worked really well. We stay as tight as possible and use that connection we've built up over the years." (bbc.co.uk, 07 Mar 2022; cheshire-live.co.uk, 07 Mar 2022)

END OF A PARTNERSHIP
In August 2021 she announced that Jennifer Kehoe would no longer be her guide. She had been guided by Kehoe since 2015 and won gold with her in slalom at the 2018 Paralympic Winter Games in Pyeongchang. "After seven glorious and successful years skiing together, we are sad to announce that we will not be defending our title together at the next Paralympic Games [Beijing 2022]. We have been working hard to find a way to enable us to train and compete together but we have encountered too many challenges out of our control. Jen has made the difficult decision to retire from elite sport to resume her career in the British Army. Our incredible partnership and friendship started in 2015 and we could not have dreamt of what the future held for us." (Facebook team page, 24 Aug 2021)

NEW GUIDE
After Jennifer Kehoe retired as her guide, Fitzpatrick began competing with Katie Guest in the 2021/22 season. "When it all happened [parting with Kehoe], I didn't have a guide, but GB Snowsport had a plan and now I am working with Katie Guest. Katie is an accomplished skier - her older sister is Olympic skier Charlie Guest - and in the past has been a reserve guide for my teammate Millie Knight, but that is only one of the elements you need as a guide. Before choosing Katie, I did try a couple of other guides but for some reason it just didn't click or their personality didn't quite match up with mine, so that makes it a bit more difficult. I actually prefer working with a female guide and GB Snowsport knew about Katie. We started training with each other in July [2021] and worked together all summer. There are only a couple of years in age between us, which is nice, and we are enjoying spending our free time together, which helps the partnership. As well as working with Katie, for some of my speed races [downhill and super G], I am being guided by Gary Smith." (bbc.co.uk, 18 Dec 2021; Instagram profile, 27 Nov 2021)