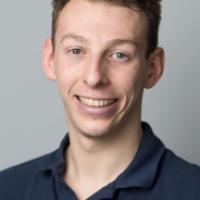 When and where did you begin this sport?
He began swimming with the New Milton Torpedoes in England.
Why this sport?
"Initially it was my parents who got me into competitive swimming. Then when I was at home watching London 2012 [Paralympic Games] and seeing the likes of Ellie Simmonds and Jon Fox competing, it inspired me to do what they do. I'm very fortunate to have reached that same level."

An injury prevented him from competing at the 2016 European Championships in Funchal, Portugal. (dailyecho.co.uk, 16 Sep 2016)

He underwent three major operations in 2012. (dailyecho.co.uk, 16 Sep 2016)
Sporting philosophy / motto
"Always keep that dream in mind by listening to your coaches. It's not going to be an easy journey as a swimmer." (bbc.co.uk, 06 Sep 2019)
Awards and honours
He was named Member of the Most Excellent Order of the British Empire [MBE] in January 2017. (lborolondon.ac.uk, 06 Jan 2017)
Ambitions
To successfully defend his Paralympic title in the men's S7 400m freestyle at the 2020 Games in Tokyo. (bbc.co.uk, 06 Sep 2019)
Other information
GOLD MEDAL TRIBUTE
He dedicated the gold medal he won in the S7 400m freestyle at the 2016 Paralympic Games in Rio de Janeiro to his father Bernard, who died prior to the start of the Games. Five days before he passed away, Bernard gave him two locks of his hair so that Jones knew a part of his father would be at the Games with him. "My dad passed away with 58 days to go to Rio so that race was as much for him as me. It was hard to take initially but he has supported me for all these years and he would have wanted me to have swum my best." (dailyecho.co.uk, 16 Sep 2016)