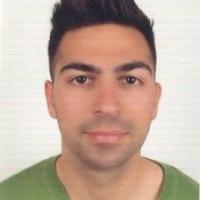 When and where did you begin this sport?
He first tried athletics at age six in Rhodes, Greece. He took up Para athletics in 2014.
Why this sport?
His parents encouraged him to start the sport.
Club / Team
Seitis Training Club: Greece
Name of coach
George Panagiotopoulos [personal], GRE

In 2015 he was presented with a sporting achievement award by the Hellenic Paralympic Committee. (paralympicus.gr, 18 Dec 2015)
Other sports
He has competed in able-bodied athletics at national level in Greece. (Instagram profile, 20 Jun 2017)
Famous relatives
His brother Grigoris was named the 2018 Mr. Hellas by the World Amateur Body Building Association [WABBA]. (protothema.gr, 28 Nov 2018)
Ambitions
To win a gold medal in the T64 200m at the 2020 Paralympic Games in Tokyo. (jenny.gr, 24 Feb 2020)
Impairment
He was involved in a car accident in 2013, which resulted in the amputation of his right leg below the knee. (dimokratiki.gr, 06 Dec 2015; Athlete, 23 Oct 2015)
Other information
OTHER ACTIVITIES
In 2018 he and his brother Grigoris made an appearance on the Greek television show 'Celebrity Travel'. The siblings travelled to Peru for the show. (znews.gr, 11 Dec 2018; tlife.gr, 08 Dec 2018)

QUICK RECOVERY
He says the three-month recovery period from his accident to the time of his return to the track is one of his greatest achievements. "The biggest success was the recovery time I had from the accident. Three months after [the accident] I ran my first race. I think this is my biggest success to date." (jenny.gr, 24 Feb 2020)