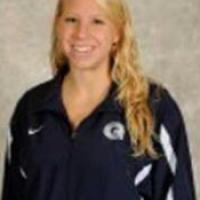 When and where did you begin this sport?
She grew up swimming as an able-bodied athlete and competed in high school on state-level relay teams. She took up Para swimming in 2012 following her accident.
Why this sport?
Swimming helped her recovery and rehabilitation following her accident. "When I woke up at the hospital, I was pretty freaked out. But, being a swimmer, I was able to put it in perspective."
Training Regime
She trains in the mornings on weekdays. The majority of her training is in the pool but she also does weight sessions.

Hobbies
Baking, walking her dog. (Twitter profile, 14 Oct 2018)
Most influential person in career
Her parents. (theperformancekitchen.co.uk, 03 May 2017)
Sporting philosophy / motto
"An incredible work ethic, dedication, and attention to detail can turn people who may not have been born with any athletic genes into great athletes." (theperformancekitchen.co.uk, 03 May 2017)
Awards and honours
She won several awards while attending Georgetown University in the United States of America between 2010 and 2014. These included Most Resilient Female Athlete, The John Hensler Award for Most Improved Female Swimmer and Princeton University's 'Big Al' Inspirational Swimmer Award. She was also named in the Big East All-Academic Team. (teamusa.org, 25 Mar 2015)
Ambitions
To compete at the 2020 Paralympic Games in Tokyo. (teamusa.org, 22 Nov 2016)
Impairment
In January 2011 she attempted to open a window of her university dormitory room but fell out of the window. She dropped five stories to the ground, landing on her feet. She sustained an injury to her spine, a broken foot and a punctured lung. As a consequence she has permanent rods and pins in her spine. "My discs were OK, just the vertebrae body got squished." (timesherald.com, 19 Aug 2012; georgetown.patch.com, 11 Jan 2011)
Other information
OTHER STUDIES
She has studied medicine at the Sidney Kimmel Medical College at Thomas Jefferson University in Philadelphia, PA, United States of America. She also served as vice-president of the Med-Peds [Medicine Paediatrics] Society of Philadelphia at Sidney Kimmel Medical College. (phillymag.com, 29 Nov 2018; Facebook profile, 27 Nov 2018; jefferson.edu, 06 Oct 2018)

TATTOO
She has the word 'Believe' tattooed on her side, just above a scar from one of the operations she underwent after her accident. 'Believe' was the motto of the Magee Rehabilitation Hospital in Philadelphia, PA, United States of America, where she learned to walk again. (teamusa.org, 22 Nov 2016)