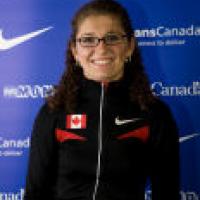 Nicknames
Mikey (canadianathletesnow.ca, 23 Sep 2011)
Memorable sporting achievement
Defending her 200m title at the 2012 Paralympic Games in London. "They were the most successful Paralympic Games in history. I left the village with this overwhelming sense of wonder and accomplishment for having been part of what happened. For the first time, the majority of reporters were talking about the brilliance and the talent of the athletes. We were just marathoners, and swimmers, and sprinters. It really was just a huge advancement for the Paralympic movement." (thenav.ca, 28 Nov 2012)
Superstitions / Rituals / Beliefs
Before a race, she listens to her favourite song and uses visualisation techniques to help her focus on the race. (paralympic.ca, 11 Nov 2010)
Sporting philosophy / motto
"We all have struggles every single day of our lives. We just have to have the courage to try." (canada.com, 31 Dec 2012)
Awards and honours
She was named Best Female Athlete of 2012 by the Canadian Paralympic Committee. (paralympic.ca, 10 May 2013)

In 2008 she was presented with the Key to the City of Winnipeg, MN, Canada. (mikeystilwell.com, 30 Mar 2010)
Other sports
She won a gold medal as part of Canada's wheelchair basketball team at the 2000 Paralympic Games in Sydney. (mikeystilwell.com, 30 Mar 2010)
Impairment
She fell from a friend's back while piggyback riding at age 17 and landed on her neck. The impact shattered vertebrae and left her with quadriplegia. She has required multiple operations on her spine since, including various bone fusions and grafts from her hip and calf bone. (canada.com, 31 Dec 2012; mikeystilwell.com, 30 Mar 2010)
Other information
RETIREMENT
She announced her retirement from competitive sport in February 2017. "This decision has been difficult, but the time is right. I will move forward with new goals, taking the best of what I've learned through my sports career with me." (paralympic.org, 16 Feb 2017)

POLITICIAN
In May 2013 she was elected as a government official after winning the seat for the Parksville-Qualicum constituency on Vancouver Island, BC, Canada. She was named minister of social development and social innovation in February 2015. (winnipegfreepress.com, 15 May 2013; michellestilwellmla.ca, 17 Apr 2015)

NATIONAL FIRST
After winning gold in wheelchair basketball at the 2000 Paralympic Games in Sydney, she won a further two gold medals in athletics at the 2008 Games in Beijing. This meant she became the first Canadian Paralympian to win gold in two different [summer] sports at the Paralympic Games. (cbc.ca, 01 Sep 2012; canada.com, 31 Dec 2012)

FAMILY
She met her husband Mark at the 1996 National Basketball Championships in Montreal, QC, Canada. When he discovered Stilwell was from Winnipeg, MN, Canada, he told her his aunt and uncle lived there. They turned out to be her parents' best friends. "I have pictures of my dad dancing with his mum at his aunt and uncle's cottage several years before we ever met," she said. (canada.com, 31 Dec 2012)

EARLY DAYS
Despite her initial reluctance, coach Peter Lawless was insistent that she should try wheelchair racing in the period after her basketball career ended. She finally agreed to attend a meet and competed in a 1500m race, which took her nearly 15 minutes to finish. "I got beaten by a 13-year-old boy. I felt so slow, so pathetic, but I was pretty much hooked. I was determined that wasn't going to happen again." (metronews.ca, 28 Aug 2011)