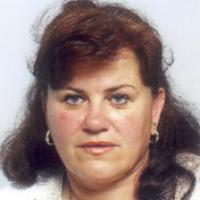 When and where did you begin this sport?
She began para-athletics in Kraljevica, Croatia.
Why this sport?
She took up the sport as part of her rehabilitation.
Club / Team
AK Srce: Rijeka, CRO

Hobbies
Wheelchair tennis. (ititomozes.com.hr, 09 Feb 2016)
Awards and honours
She received an award for excellence in 2012 from the Rijeka Sports Association in Croatia. (in-portal.hr, 28 Jun 2013)
Other sports
She represented Yugoslavia in wheelchair basketball at the 1974 European Championships in Ploemeur, France. (in-portal.hr, 28 Jun 2013)
Impairment
She has paraplegia as the result of falling 13 metres from a tree in 1968, at age 13. (ititomozes.com.hr, 09 Feb 2016)
Other information
PARALYMPIC VETERAN
She competed at eight editions of the Paralympic Games between 1972-2012. At age 17 she made her Paralympic Games debut for Yugoslavia at the 1972 Games in Heidelberg. She represented Croatia for the first time at a Games in 1992 in Barcelona. (sportsdeskonline, 18 Feb 2016; ititomozes.com.hr, 09 Feb 2016)

NATIONAL FIRST
She was the winner of Croatia's first ever medal at a Paralympic Games, a bronze, at the 1992 Games in Barcelona. (IPC, 2011)

OTHER ACTIVITIES
She has served as president of the Sports Association for Persons with Disabilities in Rijeka, Croatia. (hrvatskareprezentacija.hr, 15 Feb 2014)