In her Paralympic debut at Athens 2004, Minna Leinonen completely turned the shooting world upside down by winning R5 (mixed 10m rifle prone) gold with a world and Paralympic record.

Leinonen was only 23 when she burst onto the scene, but her early success was not to last. In the intervening years between Athens and the 2013 IPC Shooting European Championships, the Finn could not convert her performances from various World Cup events into medals at major international Championships.

That all changed in 2013 with a European bronze in the R5, clearing her nearest competitor by 20.8 points. In the same year, she was named Athlete of the Year by the Finnish Shooting Sport Federation.

In 2014 she went onto win gold in R5 at the World Championships.

Leinonen’s was hoping that her motto of “one perfect shot at a time” would carry her to a return to the top of the podium in at the Rio 2016 Paralympic Games.

But it was not to be and in her sole event the Fin did not manage to make it into the final. Leinonen will be drawing on her experience from previous comebacks in the hope of making it back to the top again in the coming seasons.

When and where did you begin this sport?
She took up the sport at age 18 in Kajaani, Finland.
Why this sport?
In her final year of high school, her physical education teacher took her class to a shooting range. "I got very enthusiastic and wanted to continue shooting."

She was the flag bearer for Finland at the opening ceremony of the 2008 Paralympic Games in Beijing. (docstoc.com, 06 Sep 2008)

She was named Keski-Suomen Ampujat's Athlete of with an Impairment of the Year in 2005 and 2006. (kesli.fi, 2014)
Impairment
She was born with myopathy, a condition that means the muscle fibers in her body do not function correctly. (Athlete, 17 Oct 2011)
Other information
RETIREMENT
She retired from competitive shooting in 2018. "I feel that I've given my all to shooting and got everything I ever wanted from it. Continuing would have required deep fire in heart, but I don't have it anymore. I had decided to have a year off after Rio [2016 Paralympic Games] and give myself enough time to find out if I'll start missing shooting. As longing never showed up the decision was quite easy to do. Now it feels good to have time and power to study and do many other things that I couldn't do during my shooting career." (paralympic.org, 22 Feb 2018)

OTHER STUDIES
She has studied pharmacy and zoology at the University of Eastern Finland in Joensuu, Finland. (Facebook profile, 03 Jul 2015) 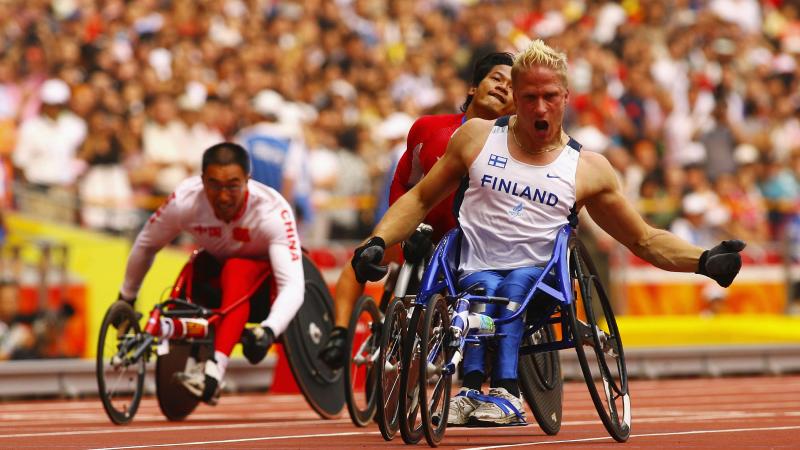