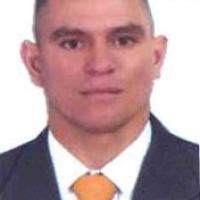 When and where did you begin this sport?
He began swimming at age six, and took up Para swimming seriously in 1995 in Bucaramanga, Colombia.
Why this sport?
He struggled with depression following his accident. He tried wheelchair basketball but took up Para swimming more seriously a year later. "I realised swimming was perfect for me because it makes me feel free. It is a wonderful sport where you are constantly competing against yourself, trying to lower your times. Swimming allows me to challenge myself every day."
Club / Team
Colombia sin Limites: Bucaramanga, COL
Name of coach
Luis Carlos Calderon Fuentes [national, nephew], from 2009

In 2021 he was presented with a Lifetime Achievement Award by the Colombian newspaper, El Espectador. (elespectador.com, 12 Dec 2021; Instagram profile, 06 Dec 2021)

FURTHER EDUCATION
He earned a degree in physical education at the University of Pamplona in Colombia. (Athlete, 10 Sep 2019)