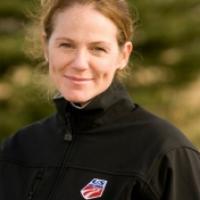 Injuries
In 2008 she slipped while at a World Cup race in Norway. She broke her right tibia and fibula and was out of action for the rest of the year. (monicabascio.net, 03 Mar 2014)
Awards and honours
She was named 2012/13 Paralympic Sportswoman of the Year by the United States Olympic Committee [USOC]. (teamusa.org, 24 Oct 2013)
Other sports
She won two silver medals in handcycling at the 2012 Paralympic Games in London, and competed in cross-country skiing and biathlon at the 2006 Paralympic Winter Games in Turin. (SportsDeskOnline, 07 Sep 2012)
Famous relatives
Her husband Ian Lawless has served as para-cycling high performance director at US Paralympics. (Ian Lawless Facebook profile, 22 Sep 2016; uci.ch, 18 Nov 2015)
Impairment
In 1992 she was paralysed from the waist down after a downhill skiing accident in Lake Tahoe, CA, United States of America. (monicabascio.net, 03 Mar 2014; usparalympics.org, 18 Oct 2011)
Other information
SANCTION
She tested positive for the prohibited substance tuaminoheptane at the 2012 para-road cycling World Cup event in Rome, Italy. She claimed the positive sample was a result of taking an over-the-counter nasal spray. She was banned from the sport for three months, becoming eligible to return to competitive action in August 2012. (wheelchairpride.com, 10 Sep 2012; usada.org, 15 Aug 2012)

OTHER ACTIVITIES
In September 2016 she was elected to the International Paralympic Committee [IPC] Athletes' Council. (insidethegames.biz, 18 Sep 2016)

FAMILY FIRST
She took a season off skiing to raise her son Henry, who was born in July 2008. "I like to think that down the road he will be proud that I was able to commit not only to him but to my training as an athlete who maintained an elite level." (usparalympics.org, 18 Oct 2011; theskichannel.com, 25 Aug 2011)