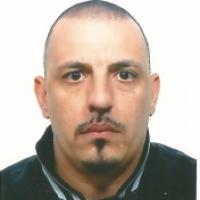 When and where did you begin this sport?
He took up Para athletics in 2011.
Why this sport?
He decided to compete in athletics after learning to walk again with the support of prosthetic limbs during his rehabilitation.
Club / Team
Gruppo Sportivo Paralimpico Difesa [GSPD]: Italy

Nicknames
Coccolino. (Facebook profile, 23 Sep 2019)
Most influential person in career
Competing at the 2014 Invictus Games in London, England. (incodaalgruppo.gazzetta.it, 30 Jul 2014)
Sporting philosophy / motto
"Never give up." (Facebook page, 02 Aug 2019)
Other sports
He competed in wheelchair basketball and wheelchair rugby at the 2014 Invictus Games in London, England. He also played sitting volleyball at Sitting Volley Cagliari. (Facebook page, 18 Sep 2019; disabili.com, 11 Sep 2014; cipsardegna.org, 24 Apr 2019)
Impairment
He was involved in a car accident in 2010, which resulted in the amputation of both his legs below the knee. (fispes.it, 01 Oct 2015; unionesarda.it, 04 Dec 2010)
Other information
RETURN TO SPORT
In 2019 he returned to sport after a two-year break. "Going to Grosseto to compete at the Para Athletic Grand Prix after almost two years of absence and entering the platform with few expectations and eventually setting a world record [in the F62 shot put] was really priceless. It was one of the most emotional moments in my life." (vistanet.it, 10 Jun 2019)