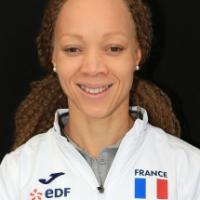 When and where did you begin this sport?
She took up Para athletics in 1998 at school.
Why this sport?
She liked sports and the feeling of victory. She first tried handball and basketball but had to stop because of her visual impairment. A teacher then invited her to try Para athletics.
Club / Team
Racing Club de France Issy Avia: France

Nicknames
Nanto (afrique.lepoint.fr, 16 Sep 2016)
Hobbies
Listening to music, dancing, watching movies. (Facebook page, 20 May 2017)
Hero / Idol
US sprinter Michael Johnson, French wheelchair racer Nicolas Brignone. (Athlete, 23 Oct 2015)
Injuries
She was affected by several injuries in the three years leading up to the 2012 Paralympic Games in London. (handisport.tv, 09 Dec 2016)
Sporting philosophy / motto
"Sport has helped me realise that beyond my family sphere, I had value. I never had any embarrassment within my family, because albinism was not a subject, my father also has it. But once I got out of my house, I remembered that I was different. Sport has allowed me to affirm that, thanks to this difference, I was able to do things as well, even better than others. It opened doors for me that I wouldn't have been able to open if I didn't have this impairment." (francetvinfo.fr, 13 Jun 2021)
Awards and honours
In 2016 she was named a Knight of the Legion of Honour by the French president. (cpsf.france-paralympique.fr, 01 Dec 2016)
Famous relatives
Her father Salif Keita is a Malian musician and a descendant of the founder of the Mali Empire, Sundiata Keita. (afroziky.com, 02 Feb 2014; assatashakur.org, 30 Oct 2007)
Impairment
She was born with albinism. Her father also has the condition. (afroziky.com, 02 Feb 2014)
Other information
PARIS 2024
She has served on the board of directors for the organising committee of the 2024 Olympic and Paralympic Games in Paris. (LinkedIn profile, 08 Aug 2021; rfi.fr, 02 Mar 2018)

OTHER ACTIVITIES
She has served as president of her father's charity, The Salif Keita Global Foundation. The organisation aims to help people in Africa with albinism to overcome the difficulties that they face. "My father has always been an example for me. And for several reasons. First, because he is an ambassador and I have always seen him work for this cause. But also because he has always told me that in life, it is important to get involved in causes that are close to our hearts. Especially when we ourselves have been lucky in life. It was also important for me to get involved in a cause that I found just and above all, to tell myself that I had the opportunity to make a difference." (afroziky.com, 02 Feb 2014; lehubsante.com, 26 Nov 2015; elle.fr, 26 Jun 2021)

FROM MALI TO FRANCE
Born in Bamako, Mali, her father took her to France when she was age two so that they could escape the abuse they received due to their albinism. (Facebook page, 20 May 2017)