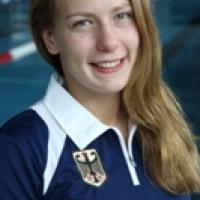 When and where did you begin this sport?
She began swimming at age six in Bielefeld, Germany.
Why this sport?
Her parents were swimmers and she always wanted to learn how to swim.
Club / Team
SC Potsdam [GER] / TG Ennigloh [GER]:
Name of coach
Christian Schnittger [father], GER; Jorg Hoffmann [SC Potsdam], GER
Training Regime
She trains for around 30 hours each week, including 10 to 12 sessions in the pool, and seven to 10 strength and fitness sessions.

Nicknames
Maikeson [she is called that by her best friend]. (Athlete, 20 Aug 2010)
Memorable sporting achievement
Winning silver in the S12 50m freestyle at the 2016 Paralympic Games in Rio de Janeiro. (Athlete, 05 Dec 2017)
Most influential person in career
Her father. (Athlete, 05 Dec 2017)
Injuries
In October 2015 she injured the cruciate ligament in her knee. She was also diagnosed with deep vein thrombosis in her calf muscle, with doctors initially telling her she would be unable to compete for three months. However, she made her return a month early at a meet in Berlin, Germany. (maike-schnittger.de, 19 Feb 2017)

She broke her arm in 2008 and missed the German National Championships. (Athlete, 20 Aug 2010)
Superstitions / Rituals / Beliefs
Before the start she sponges herself. The amount of times she does this is determined by her age at the time. (Athlete, 20 Aug 2010)
Sporting philosophy / motto
"Always approach life with a big smile." (Facebook profile, 26 Apr 2015)
Awards and honours
She received the 2014 Special Award at the Sports Gala in Bunde, Germany. (hsg-spradow.de, 03 Mar 2015)

She was named Best Young Swimmer of Germany in 2008 and 2010. (Athlete, 20 Aug 2010)
Famous relatives
Her father Rainer Schnittger has coached swimming at the TG Ennigloh club in Germany. (Facebook page, 02 May 2016)
Ambitions
To compete at the 2020 Paralympic Games in Tokyo. (Facebook page, 20 Mar 2018)
Impairment
In November 2004, at age 10, she was diagnosed with cone-rod dystrophy [CRD]. The condition causes the retina to deteriorate, and she has about one percent sight as a result. (maike-schnittger.de, 19 Feb 2017; Athlete, 13 Jul 2010)
Other information
FROM TOKYO TO GERMANY
She was born in Japan, where her parents were working as teachers at a German school. The family returned to Germany in 1996. She believes the Japanese connection in her past gives her extra incentive to compete at the 2020 Paralympic Games. "They will be like a home Games for me." (maz-online.de, 17 Jan 2017, 17 Apr 2014)