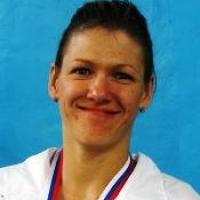 Other information
DISABILITY NO BARRIER
Despite suffering from cerebral palsy she says she has never let it become a limitation on her life. She started to swim, learnt to drive a car, got married and despite many people warning her against having a baby she successfully gave birth to a healthy son. She says her son gives her happiness that cannot be compared with anything else, and she feels like the luckiest person on earth. (Youtube interview, 25 Mar 2011)

MATERNITY LEAVE FROM SWIMMING
She has taken time away from swimming due to the birth of her son in 2009. She has said she will return to the pool to introduce swimming to her son, but was concerned that starting intensive training in the cold water could affect her breast-feeding. She was hoping to return to training in time for the 2011 Russian championships [in April]. (Youtube interview, 25 Mar 2011)