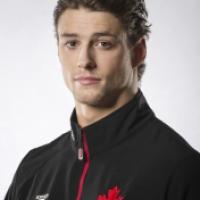 When and where did you begin this sport?
He began swimming lessons at age nine.
Why this sport?
He started swimming lessons as it was the only way he could convince his parents to buy him goggles. He loved that his swimming ability could be improved in a short amount of time, and became addicted to competing.
Club / Team
Surrey Knights Swim Club : Canada
Name of coach
Reg Shaw [club], CAN; Craig McCord [national

He was named the 2014 Male Para-swimmer of the Year by Swimming Canada. (swimswam.com, 26 Nov 2014)
Famous relatives
He is related to Norwegian American football player and coach Knute Rockne. (swimming.ca, 2015)
Impairment
He has a bone deficiency in one knee, a condition called osteochondritis dissecans. He has had over a dozen operations on the knee since he first broke it while playing football at age 11. The condition has deteriorated over time. (natation.ca, 21 Jul 2010)
Other information
TATTOOS
He has numerous tattoos, including one that says 'No Surrender' over his heart. (vancouversun.com, 1 Aug 2012)