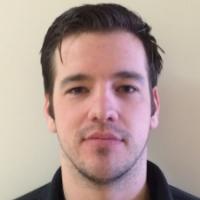 When and where did you begin this sport?
He began playing ice sledge hockey at age 10 in Cardiff, Wales.
Why this sport?
He was recovering in hospital after his accident when he was told about ice sledge hockey by Aaron Rees, who had lost his legs because of meningitis. A year later he was ready to try the sport and telephoned Rees to ask when training was. He went along and loved it immediately.

Nicknames
Stumpy (Athlete, 09 Dec 2010)
Most influential person in career
Athletics coach Anthony Hughes. (cardiffdisabilitysport.com, 05 Jan 2013)
Injuries
In 2010 he required a subacromial decompression operation on his right shoulder. It took him six months to recover. He required further shoulder surgery in 2012. (penarthtimes.co.uk, 19 Feb 2015; telegraph.co.uk, 26 Aug 2012; Athlete, 09 Dec 2010)
Other sports
He represented Great Britain in athletics at the Paralympic Games in 2008 and 2012. He competed for Wales in Para powerlifting at the 2018 Commonwealth Games in Gold Coast, QLD, Australia, and has also represented Wales in Para swimming. (bbc.co.uk, 21 Jan 2018; SportsDeskOnline, 05 Feb 2021; peoplescollection.wales, 08 Jul 2014)
Ambitions
To win a medal at the Paralympic Games. (penarthtimes.co.uk, 19 Feb 2015)
Impairment
He lost his left leg at the hip and had his right leg amputated below the knee after being dragged under a train on his ninth birthday. "I stupidly tried jumping onto a moving train. Me, my brother and a couple of friends were down on the track. A slow-moving freight train was going past. I decided to try to jump onto it, slipped, and got dragged underneath. I knocked myself out and woke up in a bush. One of my mates had dragged me off the track while my brother and my cousin ran to get help. I didn't know what had happened until I tried sitting up and realised, 'Yeah, that's my leg on the track'." (peoplescollection.wales, 08 Jul 2014; telegraph.co.uk, 26 Aug 2012)
Other information
FIRST DANCE
He surprised guests at his wedding by wearing prosthetic legs to perform the first dance with his new wife Charlene. He usually found the prosthetics too painful to wear. A video of their performance went viral on the internet, and in 2014 he went on to appear in a Paralympic special edition of British competition TV programme 'Strictly Come Dancing'. "I wanted to dance with Charlene more than anything but not pushing myself along in my wheelchair. I was adamant I was going to do it on my legs and if I set my mind to something I always get there. We practised for eight months in our living room and no one had a clue." (dailymail.co.uk, 14 Mar 2014; walesonline.co.uk, 21 Aug 2013)