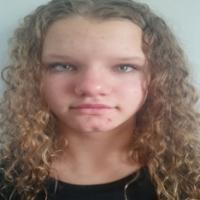 When and where did you begin this sport?
She took up the sport in 2016 at school in Avon, OH, United States of America.
Why this sport?
She began running as part of her training for Para swimming. "For swimming, they said I needed to do another sport for endurance to get stronger, so I started running with my school team. It was so much more entertaining. I fell in love with track so easily."
Club / Team
SwimStrong: Berea, OH, USA
Name of coach
Joaquim Cruz [national], BRA

She underwent muscle and nerve transposition surgery in 2008, which took her one year to recover from. (Athlete, 21 Jan 2016)

She has fractured her elbow twice. (Athlete, 21 Jan 2016)
Sporting philosophy / motto
"Through hard work, perseverance and a faith in God, you can live your dreams." [US neurosurgeon and author Ben Carson]. (Athlete, 21 Jan 2016)
Other sports
She has represented the United States of America in Para swimming, and won silver in the S7 50m butterfly at the 2015 Parapan American Games in Toronto, ON, Canada. (Athlete, 21 Jan 2016; cleveland.com, 11 Jul 2014)
Milestones
At age 12 years and 277 days she was the youngest athlete to compete at the 2015 Parapan American Games in Toronto, ON, Canada. (SportsDeskOnline, 07 May 2020)
Ambitions
To compete at the 2020 Paralympic Games in Tokyo. (azfamily.com, 24 May 2019)
Impairment
She was born with arthrogryposis multiplex congenita, which limits the mobility of her arms. (Athlete, 21 Jan 2016; morningjournal.com, 08 Aug 2013; azfamily.com, 24 May 2019)
Other information
FROM UKRAINE TO THE UNITED STATES
Born in Ukraine, she was adopted by a US family at age two and relocated to Avon Lake, OH, United States. While growing up she also lived in Curacao, in the Caribbean, and studied at the International School of Curacao in Emmastad. (bluetoad.com, 2010; Athlete, 21 Jan 2016)