Filled with Sochi 2014 highlights and a special feature about the 25 years since the IPC was founded, the second edition of 2014 will not disappoint. 13 Jun 2014
Imagen 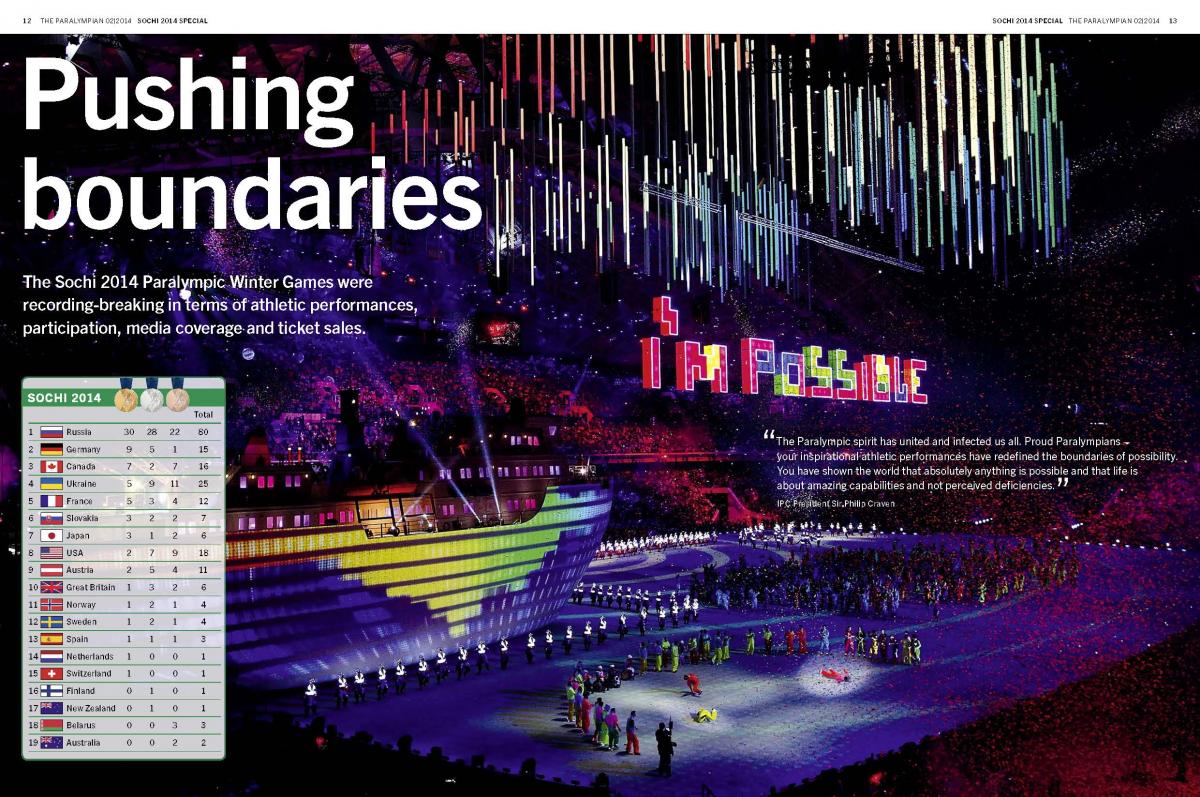 A preview of the latest issue of The Paralympian

"When you concentrate on sport and athletes instead of impairment, along with having some very good people, the success should then be assured."

The summer issue of The Paralympian magazine has been published online on Thursday (12 June) - an edition which celebrates 25 years since the International Paralympic Committee (IPC) was founded.

The magazine's second issue of 2014 explores how the IPC, since its formation on 22 September 1989, has transformed para-sport from a recreational activity based on impairments, to an entire Paralympic Movement all about ability.

Sir Philip Craven, IPC President, said: "When you concentrate on sport and athletes instead of impairment, along with having some very good people, the success should then be assured.

"Over the last 25 years, the IPC has become more professional in all areas, with full-time experts managing different functional areas. Volunteers are still at the core of everything we do, but in just a short space of time the IPC has gone from a spare bedroom in Brugges to two offices in Bonn and a workforce of over 70 people."

This edition also looks back at the Sochi 2014 Paralympic Winter Games, which were record-breaking in terms of athletic performances, participation, media coverage and ticket sales.

It includes summaries of all sports with final medal counts, athlete perspectives and highlights, as well as social media statistics.

NBC's Nick Zaccardi writes the guest column this edition, reflecting on how the Paralympic Movement can capitalise on the success of Sochi and "crack America".

"The media landscape will change from Sochi to Rio," he writes. "But the Paralympics have adapted well from Vancouver to London to Sochi. The US is embracing the Paralympics more than ever before."

As usual there is a round-up of news from around the Paralympic Movement, other major events and a look ahead to future events.

The summer promises a dearth of World Championships, with 10 taking place between August and November. The magazine also looks ahead to the Asian Para-Games in Incheon, South Korea, and the Glasgow 2014 Commonwealth Games.

In the 'Issue of the season' section, shooters Veronika Vadovicova and Matt Skelhon discuss the best way to increase female participation in the sport and whether mixed gender events are the way forward.