Men’s Sochi 2014 medallists recreate podium at the para-snowboard World Cup as Heidi Jo Duce and Nicole Roundy are also amongst those to finish in the top three. 13 Jan 2015
Imagen 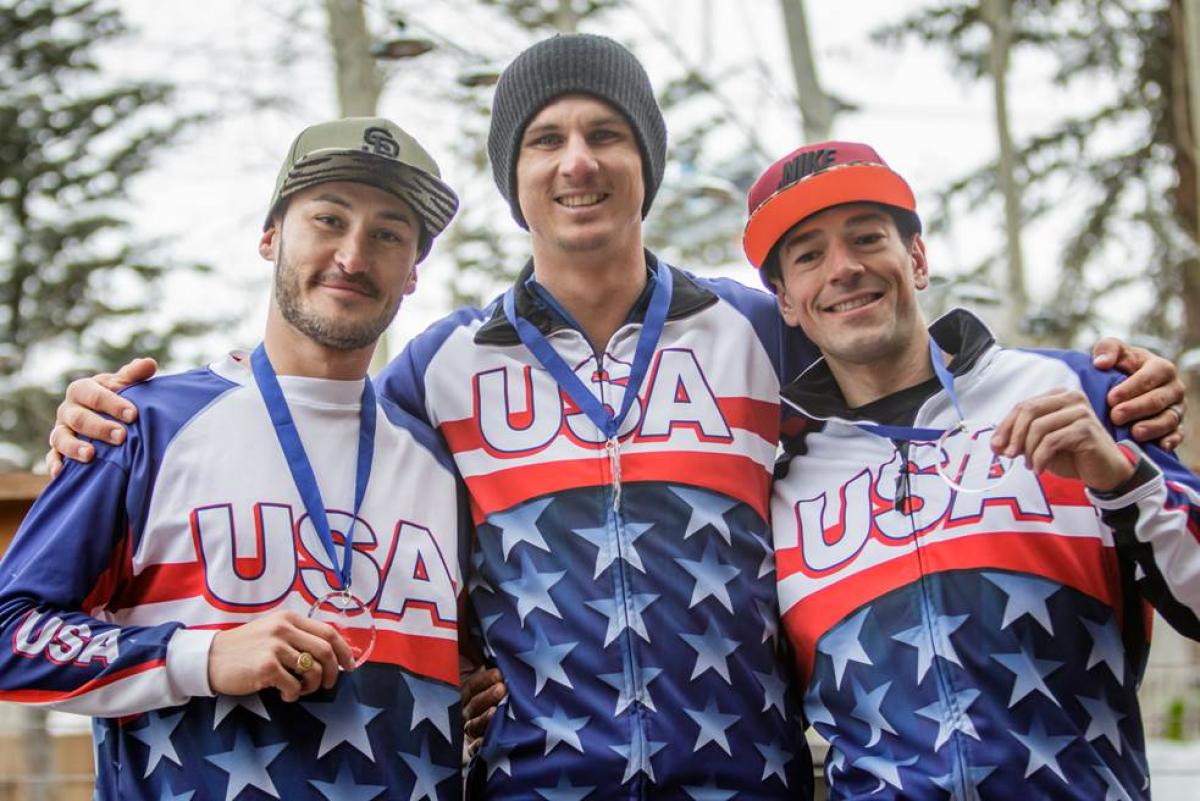 The all-American podium with Evan Strong, Mike Shea and Keith Gabel in the men's SB-LL2 at the IPC Alpine Skiing Para-Snowboard World Cup in Aspen, USA.

”To see how many athletes we have now, it’s amazing, it’s history in the making in a lot of ways.”

Team USA kicked off the first day of competition on home snow at the IPC Alpine Skiing Para-Snowboard World Cup in Aspen on Monday (12 January), sealing seven podiums across men’s and women’s events.

Strong (58.88), who won the first ever Paralympic para-snowboard gold medal at the Sochi 2014 Paralympic Winter Games, headed an all-American top three in the men’s SB-LL2 to recreate the exact podium from the Games last March.

Gabel was keen to express his delight at the progress of the sport, which in 2014-15 has separated the lower-limb impairment classifications, changed the format of snowboard-cross to feature head-to-head and added the banked slalom discipline.

“Four years ago, this was infantile,” said Gabel. “Now we’re moving up in the ranks. We’ve gotten more classifications than we ever thought we were going to have, we’ve got more disciplines than we ever planned on having. So to see that growth and be a part of it, I’m just really proud and humbled to be a part of the whole thing. To see how many athletes we have now, it’s amazing, it’s history in the making in a lot of ways.”

Gabel’s teammate Mike Schultz (1:09.89) continues a successful first season, to adding to his win from the very first banked slalom at a World Cup in November by collecting first place in the men’s SB-LL1.

Vos’ compatriot and mentor Bibian Mentel-Spee (1:09.26) dominated the women’s SB-LL2, gaining confidence ahead of the debut of the head-to-head snowboard-cross format on Tuesday (13 January).

“The course is really, really nice, I really liked it; it was a diverse course and capable for everyone and that made it really, really nice,” Paralympic champion Mentel-Spee said. “I’m really, really looking forward to tomorrow as well, where we’re going to race for the first time ever in head-to-head. I always like racing head-to-head because as soon as I get out of the gate, I just want to be up front, so that’s going to be my strategy – to pull up out front as a mad woman and try to get up front as soon as possible and hopefully stay on my feet.”

The World Cup continues on Tuesday with head-to-head races, which will see the very first winners in the new format crowned as the sport develops after a successful debut at Sochi 2014.

The season is headlined by the 2015 IPC Para-Snowboard World Championships in La Molina, Spain, from 23-28 February.

Around 80 riders from 20 countries are expected to compete in banked slalom and snowboard-cross in the newly separated men’s and women’s lower-limb impairment classifications of SB-LL1 and SB-LL2, and the upper-limb impairment category.