"Each Section Manager was nominated by their sport and each has a strong background in their respective sports and with their athletes. I’m confident in their ability to do an outstanding job."

Section Managers for 12 of the 13 sports Australia is likely to contest in London were officially appointed to the Team at the APC Board of Directors meeting last week in Sydney. The appointments include one Section Manager for each sport except wheelchair basketball, which has two (one for the men’s team and one for the women’s) and wheelchair tennis, which is yet to be assigned.

2012 Team Chef de Mission Jason Hellwig says that appointing Section Managers this early in the Games campaign will give athletes, coaches and officials a smoother transition into Games-time mode.

“Whilst the Section Managers normally operate as Team Manager for each sport during the four year build up to the Games, their role at Games time is quite different,” said Hellwig.

“By appointing the Section Managers now, the APC can provide them with enough information and training to deliver a seamless Games environment. They will be familiar with the APC’s operating processes as well as the needs of their team particularly in the lead up to and during the Games.”

Managers will be responsible for the activities of their designated sports in the lead up to, during and post Paralympic Games and will be the key contact between the APC Team Executive, Team Headquarters staff, the athletes and coaches. The APC will also hold three Section Manager workshops between now and the Games, with the first in November.

“Each Section Manager was nominated by their sport and each has a strong background in their respective sports and with their athletes. I’m confident in their ability to do an outstanding job,” said Hellwig.

The APC is preparing to send the largest ever Australian Paralympic Team to an overseas Paralympic Games, with an expected 171 athletes and 134 staff. The APC will also hold a pre-Games staging camp in Cardiff, Wales where eight of the 13 sports will acclimatise and train in the weeks before the Games commence.

The following have been officially appointed as Team Section Managers to the 2012 Australian Paralympic Team: 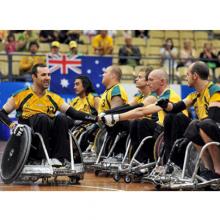