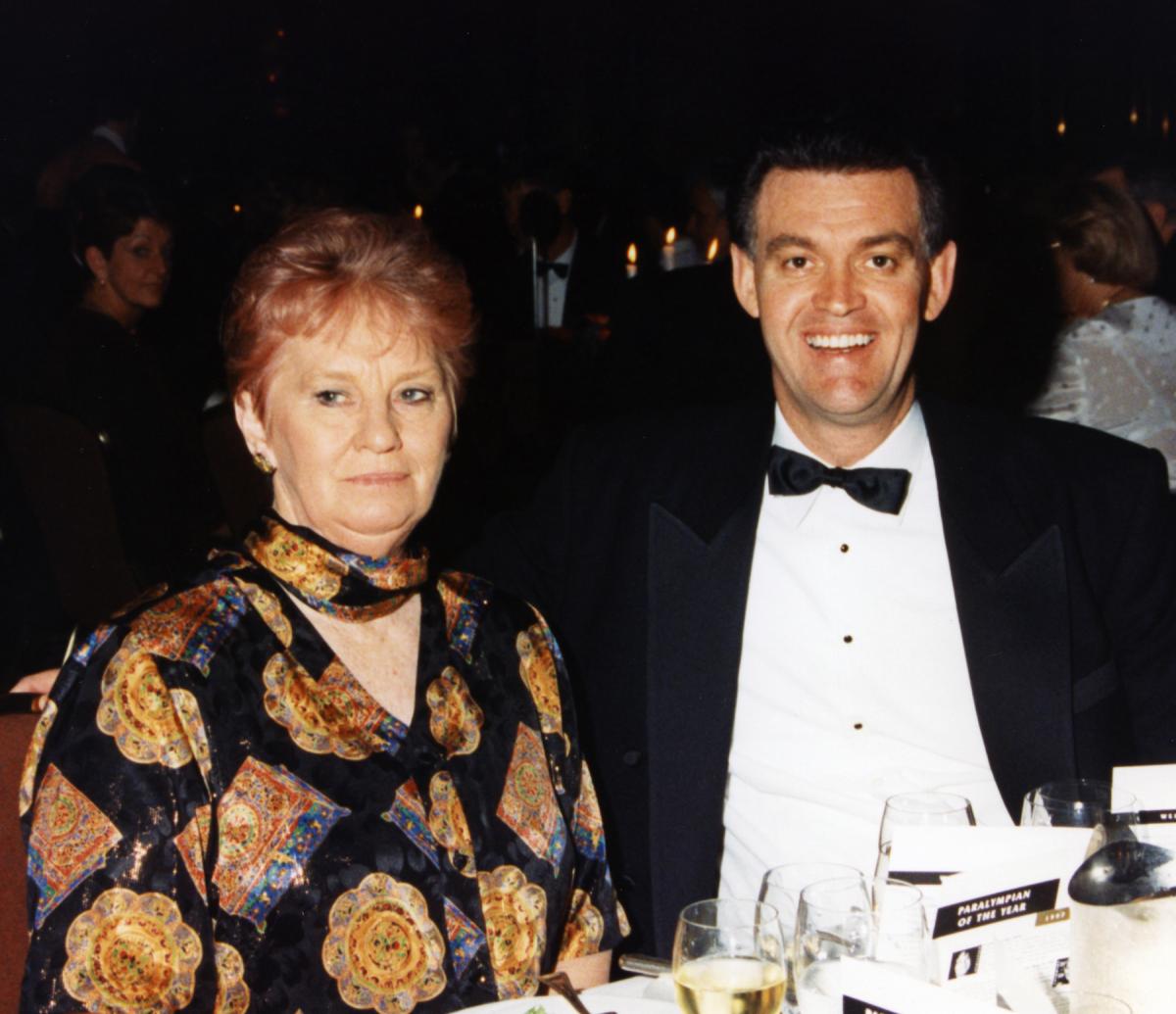 Marie Little pictured in 1997 with Michael Knight, Chairman of the Sydney Organising Committee of the Olympic Games (SOCOG).

“Marie’s contribution to sport for people with a disability is immeasurable and she leaves a legacy that will continue to make a positive impact on people’s lives for many years to come.

The Australian Paralympic Movement has lost a passionate and influential champion, with the passing on Sunday (17 August) of Marie Little.

In a sports administration career spanning more than four decades, Marie fought fearlessly for opportunities and a fair go in sport for those with an impairment, and in particular, for athletes with an intellectual impairment.

Marie was one of the founding directors of the Australian Paralympic Federation in 1990. She served on the Board until 1994 and for a further year as President in 1996-97 in the crucial period after the Atlanta Games as the APF professionalised its administration and fine tuned its sport focus in the lead-up to the Sydney 2000 Paralympic Games.

From 1991 to 1993, Marie was a member of the bid committee for the Sydney 2000 Paralympic Games. After the Games were awarded to Sydney, she served on the Sydney Paralympic Organising Committee (1993-1998), including a period as Vice-President from 1994 until 1998.

Internationally, Marie was the first female Member of the International Paralympic Committee’s Executive Board, from 1993 to 1997. She also held numerous positions on committees, councils and organisations which contributed to increasing the sporting opportunities for people with an impairment. Most notable was her involvement for many years on the executive board of the international organisation for athletes with an intellectual impairment, INAS-FID.

Within Australia, Marie founded AUSRAPID – the Australian Sport and Recreation Association of People with an Intellectual Disability – in 1986, and was its President from 1986 until her retirement in 2011.

“Marie’s contribution to sport for people with a disability is immeasurable and she leaves a legacy that will continue to make a positive impact on people’s lives for many years to come.

“After first advocating for inclusion of people with an intellectual impairment into community sport in the 1970s, Marie became a shining example of how an individual with passion, humility, drive and commitment can make a difference.

“With a netball background, Marie’s work eventually made an impact across many sports and many levels and ultimately led to the inclusion of people with an intellectual impairment at one of the world’s biggest sporting events – the Paralympic Games.”

Greg Hartung, President of the Australian Paralympic Committee from 1997 until 2013, said his former colleague will be dearly missed by those who knew her, particularly the many people she touched through her tireless work with the Paralympic Movement and for athletes with an intellectual impairment.

“Marie Little was a rare gem. She was tough and resilient – and she had a heart of pure gold,” Mr Hartung said.

“Marie was truly authentic - there was nothing phoney or fake about her. She never shirked what she saw as her duty to defend and protect those less able to do it themselves. She knew what needed to be done, and she did it without fear or favour.

“Over the decades that I knew Marie, she was never afraid to go out on a limb for what she believed. When others might have taken the easy way, Marie took the road less travelled.

“High on the list of Marie’s personal traits were integrity and courage. She may not have been text book in her approach, but she knew instinctively what leadership demanded. This was evident in the way she championed the interests of athletes with an intellectual disability, in Australia and internationally. It was about serving, not ruling!

“She had a fundamental commitment to fairness and was able to tell the difference between right and wrong. Her contribution to sport, and especially to athletes with an intellectual disability, will be one of her lasting legacies.

“My thoughts are with her family and friends."

Robyn Smith, Inas Vice President and CEO of AUSRAPID said: “In my position with AUSRAPID during the past 20 years, I have not met anyone with her enthusiasm, commitment and determination to improve the lives of those with an intellectual disability - through involvement in quality sporting and recreational pursuits."

Wayne Bird, who succeeded Marie as President of the Inas Oceania region said: “The success of Mrs Little’s work is evident throughout Australia and her vision has been a revelation to the development of sport for people with a disability in this country and throughout the world. She has been the inspiration behind Ausrapid”

She received an Order of Australia Medal in 2006 as a pioneer in Australia and overseas for her work advocating and assisting the lives of people with an intellectual impairment through sport.