"I am very happy that sport’s been remembered. Sport is a mechanism for social inclusion, health promotion and exercise of citizenship."

Today (21 September) marks the day Brazil celebrates its fight for the rights of people with disabilities, which affect 24.5 million people in the country.

This year, the government, through its board of representatives, has decided to honour the National Paralympic Committee for its constant efforts in promoting awareness and development through sports.

"I am very happy that sport’s been remembered. Sport is a mechanism for social inclusion, health promotion and exercise of citizenship”, said the President of the Brazilian National Paralympic Committee, Andrew Parsons.

Currently placed among the top 10 Paralympic nations, Brazil aims to reach the top five by 2016, when the country will stage the Paralympic Games in Rio.

In November more than 200 athletes will represent Brazil at the Guadalajara 2011 Parapan American Games in Mexico. The team will aim to surpass the 228 medals they won at 2007 Rio Parapan Games, when they finished top the medal table. 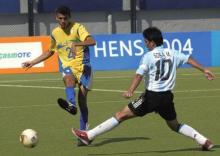