“Boccia in Britain continues to grow at an impressive rate year on year and 2012 has the potential to have a big impact on the profile of our sport. "

British Boccia star Stephen McGuire is relishing testing himself against the world’s number one nation for the first time in 2012 when his GB team take on Brazil at the BT Paralympic World Cup in May.

Twenty-seven-year-old McGuire, who took double silver at the 2010 World Championships in Lisbon and is ranked number three in the world, will lead the British BC4 team, consisting of Jamie McCowan and McGuire’s brother, Peter, at the Manchester Regional Arena.

The BT Paralympic World Cup takes place just three months before the Paralympic Games commence in London and McGuire hopes the home crowd can give him the edge over his South American rivals in what will be a historic year for sport in Great Britain.

Five-time British champion McGuire said: “All Boccia athletes are relishing the opportunity to compete in this year’s BT Paralympic World Cup. The quality on show will be incredibly high with World number one nation, Brazil, and GB being number two in the world.

“We regard this event to be of utmost importance in this Paralympic year. It will be the first time we will come up against our rivals this year. As it is still early on in the competition season, it allows us to demonstrate and gauge all our hard work over the winter.

He continued: “As this is early on in the competition season there are many aims to take from this year's BT Paralympic World Cup. Primarily we are there to win and show our main competitors that we are in good shape so close to London 2012.

“We will also use this competition to get a feel for being surrounded by home fans and tap into the advantages this can bring. This competition will help focus the mind and gauge what final touches we need to work on in the final few months before the Paralympics.”

Boccia made its debut at the BT Paralympic World Cup in 2011, where Great Britain saw off Ireland 10-1 in a one-sided victory for the home nation.

But with the inclusion of world-leaders Brazil this year, the international match is sure to be one of the spectacles of the competition and McGuire expects interest to increase as the summer goes on.

He added: “Our aims for this year are to work hard, working on developing our Boccia skills in the lead up to London 2012. It’s important we develop our tactics and a winning mentality over the coming months.

“Boccia in Britain continues to grow at an impressive rate year on year and 2012 has the potential to have a big impact on the profile of our sport.

“We have athletes ranked one, two and two over three separate classifications. The British public will see high performance athletes competing with tremendous accuracy, skill and determination this summer. Hopefully with a few medals around our necks to show for it.”

The BT Paralympic World Cup is the largest annual international multi-sport competition in elite disability sport. BT is entering its fourth year as title sponsor, upholding its strong commitment to disability sport in the UK that stretches back over twenty years.

Manchester has committed for the eighth consecutive year to hosting elite international athletes competing across Wheelchair Basketball, Athletics and Football 7-a-side. In addition, Boccia and Sitting Volleyball will once again be represented, with international matches staged during the competition.

The event schedule will see the Manchester Regional Arena host all events, starting with Athletics on 22 May, followed by Wheelchair Basketball and Football 7-a-side on 23-26 May. The Boccia match will be staged on 24 May and the Sitting Volleyball international match will be held on 25 May. 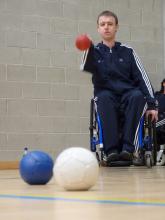