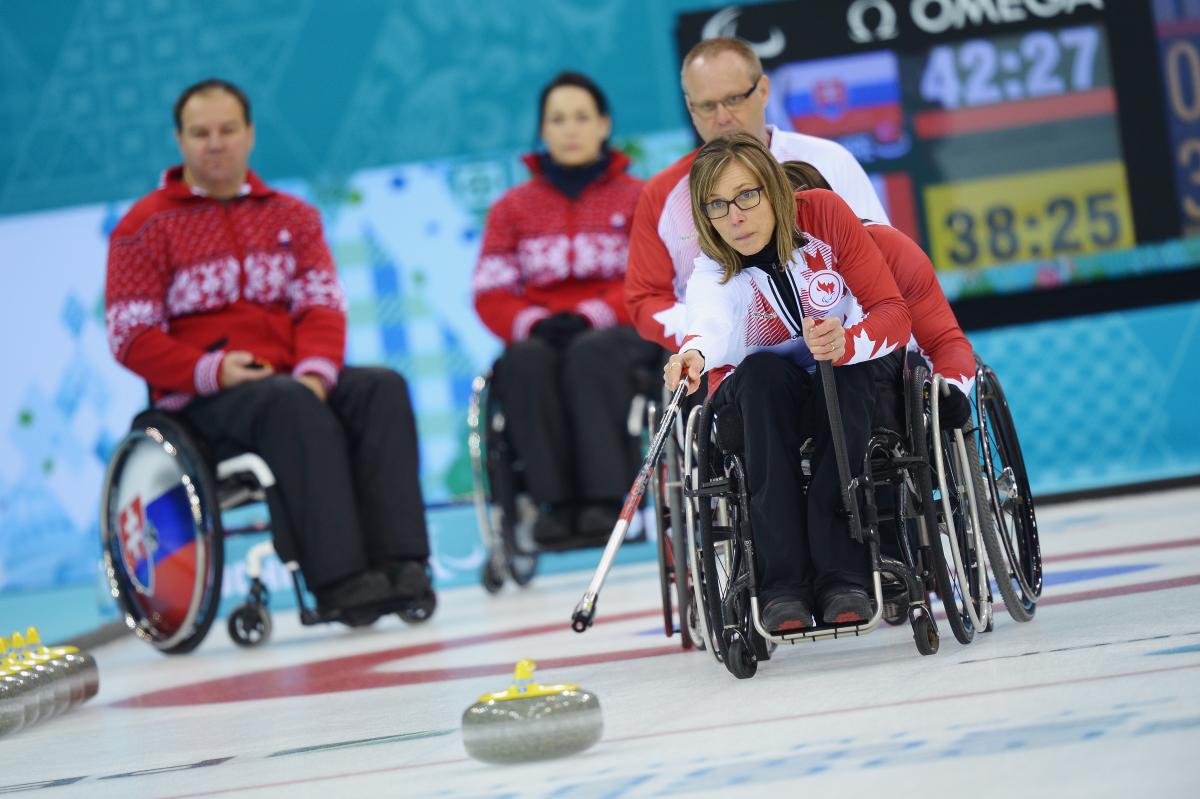 In the gold-medal game between Russia and Canada, the home team took an early advantage as their skip Andrey Smirnov made a draw to score two points.

Canada’s victory resulted in Russia picking up silver while, Great Britain won 7-3 against China to win the bronze medals.

Lead Sonja Gaudet has now played in all three of Canada’s gold medal winning Paralympic teams, which have also all been coached by Joe Rea.

In the gold-medal game between Russia and Canada, the home team took an early advantage as their skip Andrey Smirnov made a draw to score two points.

Canada then took one point in the second end before they began a four end run of consecutive steals which played a significant contribution to their win.

Russia were still in the game but gave up another steal of one point in the fifth end before Canada clinched the game in the next end.

With his last stone, Canadian skip Jim Armstrong played a precise take-out on the Russian shot stone to leave his in the four foot ring.

With last stone advantage, all Russian skip Andrey Smirnov had to do was hit Armstrong’s previous stone on the nose to score one point. He could not find enough weight however and gave up a steal of three points to take the score to 8-2 in Canada’s favour after six ends.

Russia then scored one point in the seventh end before conceding the game after seven ends of play with the final score 8-3.

After the game, Canada skip Jim Armstrong looked back on his team’s performance. He said: “Today we were on the right side of the inch and they weren't. It was our day today, that's really what it came down to."

In the bronze-medal game between Great Britain and China, China took early advantage, scoring one point in the first end before stealing two points in the second end after Great Britain skip Aileen Neilson was heavy with her final draw.

With the game still tight, Great Britain gained a crucial advantage in the fifth end when skip Aileen Neilson played a raise tap back into the four foot ring. Chinese skip Haitao Wang then missed his attempted take-out with his last stone to give up a steal of one point and leave the score at 5-3.

Great Britain then went on to steal single points in the next two ends before China finally conceded after seven ends of play, with the final score 7-3.

After receiving their medals, Great Britain skip Aileen Neilson said: “There are not many times I'm speechless, but I am speechless right now. This (her medal) isn't just for the four players that were on the ice. There are so many people who have contributed to what is hanging around our necks. I just have to say thank you to each and every one of them.”