Philippa Johnson-Dwyer and James Dwyer finally got married this year, 12 years after first bumping into each other on horseback. 29 Dec 2014
Imagen 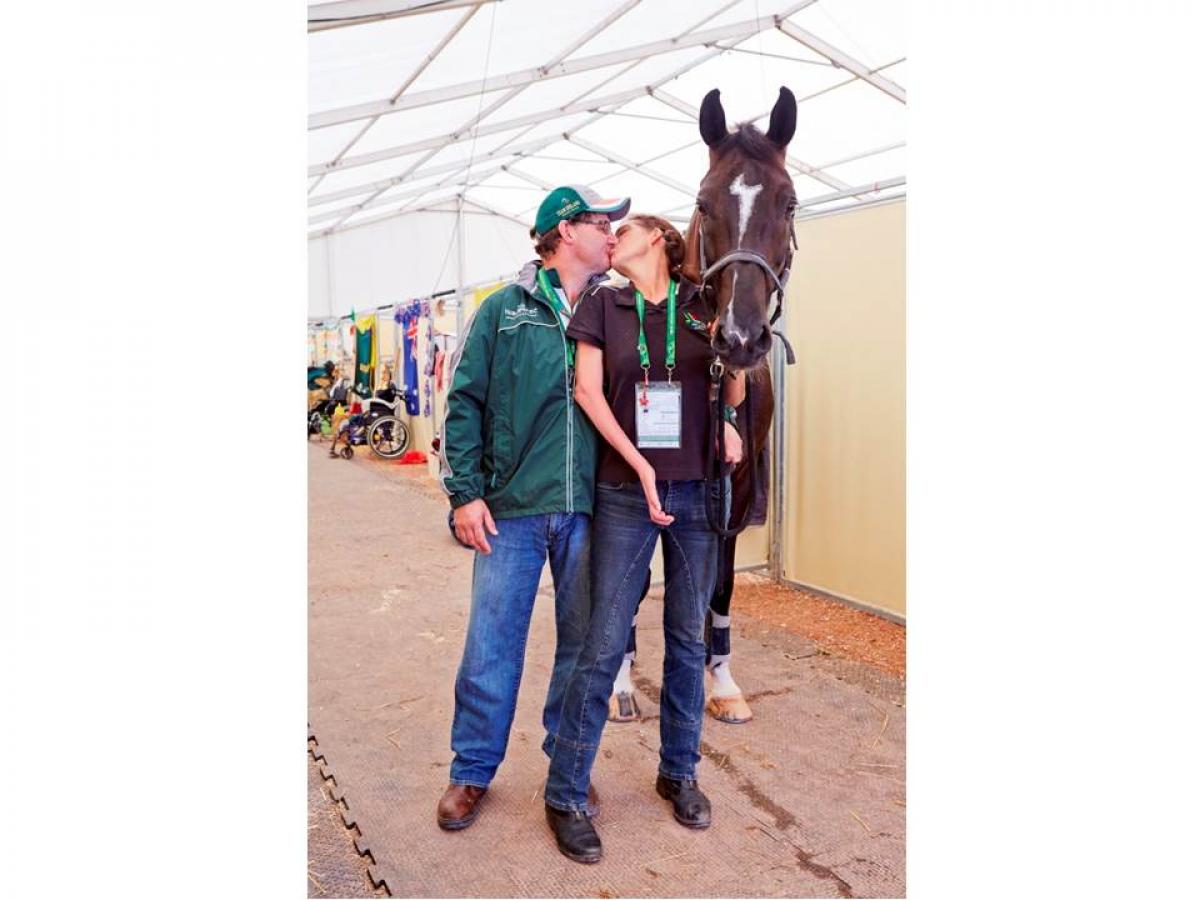 Philippa Johnson-Dwyer and James Dwyer finally got married this year, 12 years after first bumping into each other on horseback.

“I had never been to Europe and rode to the left, and every time I went into the warm up arena it was at the same time as James and I kept bashing into him, the poor guy.”

Some people get together after their eyes meet across a darkened room. Some meet online, and others may meet through work or mutual friends.

In the case of newlywed para-equestrian dressage riders Philippa Johnson-Dwyer and James Dwyer it was, as Dwyer admits, “not so much eyes across a room, more a clash of horse flesh.”

Their marriage, however, was a long time coming.

They first met 12 years ago, at the Para-Equestrian Dressage International in Moorsele, Belgium. There, Johnson-Dwyer, fresh off the plane from South Africa, found herself in the training arena with Irish rider Dwyer.

“Coming from South Africa we rode to the right,” Johnson-Dwyer explained. “I had never been to Europe and rode to the left, and every time I went into the warm up arena it was at the same time as James and I kept bashing into him, the poor guy.”

Even though they met so long ago, however, a case of mistaken identity meant that the pair did not realise their feelings for each other for some time.

Johnson-Dwyer, a two time Beijing 2008 Paralympic gold medallist, explained: “I remember seeing a wedding ring and I knew the hand it was on was Irish and I just always thought it was James. I thought ‘this is a really nice guy but, bad luck, he’s married’.

“That went on for eight years of us knowing each other, and we’ve since found out that we would look for each other at shows and chat but I just thought ‘married man, sorry’.”

It was not until the 2010 Alltech FEI World Equestrian Games in Kentucky, USA, that Johnson-Dwyer finally realised Dwyer was not married. The pair were talking when Johnson-Dwyer mentioned that she thought he was married and finally found out he was not.

After that revelation, it was still a further two years before the couple finally got together. In 2012, Dwyer came to Europe to compete and qualify for the London Paralympic Games (where he won a bronze medal).

He said: “I had to do three competitions so I flew my horse over from America. In Moorsele, Philippa was stabled beside me and, now she knew I wasn’t married, we were very chatty. We were both half an hour from Eindhoven so I asked her if I could visit her.”

“I panicked,” laughed Johnson-Dwyer. “The first thing I did was phone my best friend and said ‘This man is coming for a whole day. What do I do with him?’.”

Both admit that 2012 was probably the worst time in their careers to start a relationship. They had the Games to prepare for and Dwyer was still planning to return to the US after the summer. But, he added: “After that first day that I came to visit I knew. She was riding her gold medal horse Benedict and I was standing outside. I could see the future a little bit and I had to stop myself and say ‘oh no James you don’t want a long distance relationship’ so I went back to America and we straight away started to email each other and it started from there.”

The couple finally married early this year and are now based in Belgium where they have plans to develop and run stables specifically for riders from far afield to base themselves for each summer’s European competitions.