Could Marie Bochet’s gold be first of five?

The French alpine skier picked up gold in the downhill and is under a lot of pressure to medal in four more events. 08 Mar 2014
Imagen 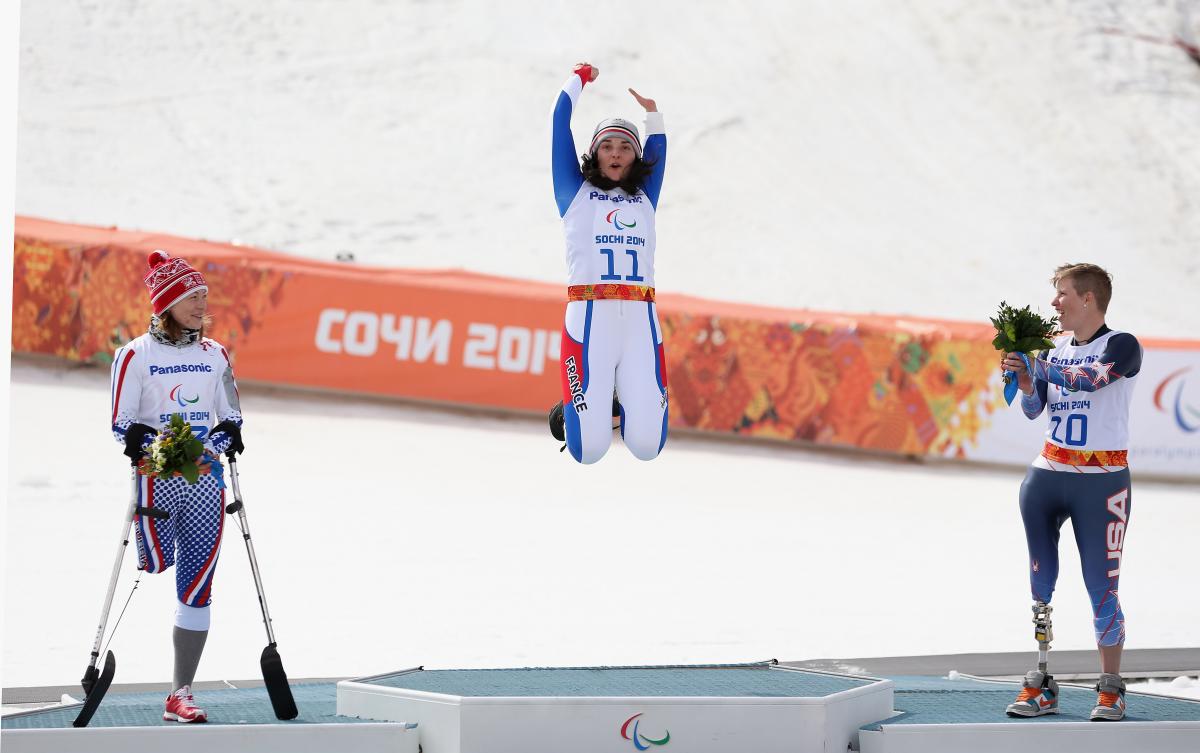 France's Marie Bochet, centre, jumps in the air at the flower ceremony after winning the women's downhill standing competition on Day 1 of the Sochi 2014 Paralympic Winter Games.

“I’m very happy to be here and win the gold medal. It’s really incredible that I started these Games as I hoped — with a gold. All I need now is to keep concentrating until the end.”

At only 20 years of age it is hard to imagine that the most dominant women’s standing alpine skier in the world at the moment, might only participate in one more Paralympic Winter Games after Sochi 2014.

But that’s exactly what Marie Bochet of France said before she even took her first official run on Saturday (8 March) at the Rosa Khutor Alpine Centre.

“Yes I think I will continue to ski in four years, maybe, I don’t know,” she said prior to racing. “But maybe I’ll do PyeongChang. I’m young and I have the time so we will see.

“I think I want to do something other than ski in my life. So if I do PyeongChang I think it’s my last Games. I don’t know. I think we have time to think about that.”

In the meantime, Bochet — who swept all five events she competed in at the 2013 IPC Alpine Skiing World Championships in La Molina, Spain — is focused on winning as much gold as possible in the women’s standing events in Sochi.

And she got off to a fast start in Saturday’s opening day of alpine competition, putting herself on a Paralympic podium for the first time in her career by winning the women’s downhill standing class with a time of 1:30.72 ahead of Russia’s Inga Medvedeva (1:32.19) and the USA’s Allison Jones (1:34.09).

“I’m very happy to be here and win the gold medal,” she said after Saturday’s race. “It’s really incredible that I started these Games as I hoped — with a gold. All I need now is to keep concentrating until the end.”

But to also dominate the slalom, giant slalom, super combined and super-G in Sochi like she did in Spain, the skiing sensation will have to continue to fend off her biggest rival, Germany’s four-time Paralympic medallist Andrea Rothfuss, who finished behind Bochet in every event at last year’s World Championships.

Unlike in her Paralympic debut at age of 15 at Vancouver 2010, Bochet said this time she is not in Sochi to socialise and soak up the experience like she was keen to do in Vancouver.

“It’s not a new thing for me, it’s already know; the organisation, the village, so I’m young, but it is okay,” she said. “I have a lot of experience so today I’m in Sochi for the sport and not the experience. I really want to ski and not see a lot of things in the Paralympic Games.

“I am very focused on my goal and my sport. I’m less nervous. I am in a better situation today than in Vancouver.”

This time around, however, there is much more pressure as the eyes of her nation are watching much more closely. In December, French officials announced they will show 60 hours of live coverage from Sochi 2014 on French television.

“It’s difficult to describe it.”