The Czechs beat the Italians for fifth place and the South Koreans defeated the Swedes for seventh at Sochi 2014. 14 Mar 2014
Imagen 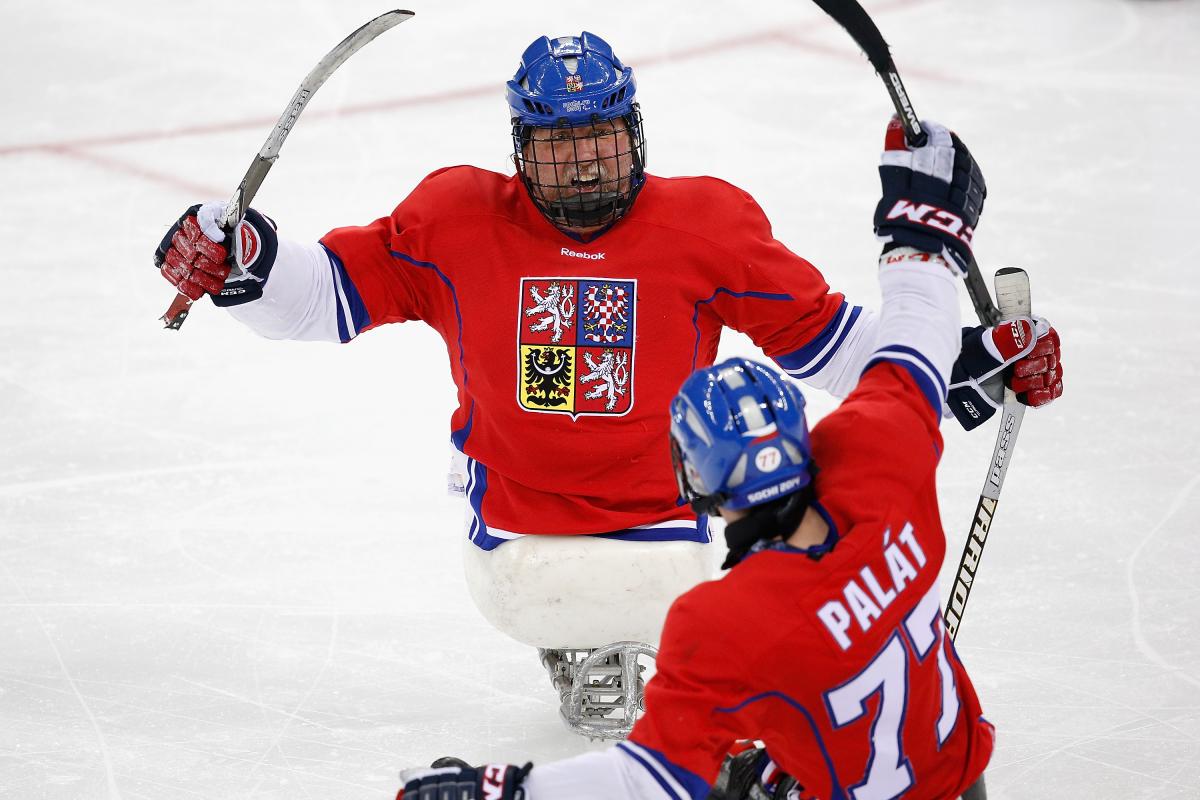 The Czech Republic's Tomas Kvoch celebrates with his teammates at the Shayba Arena in Sochi.

For Italy, it was their highest finish ever at a Paralympic Winter Games.

The Czech Republic are leaving the Sochi 2014 Paralympic Winter Games in fifth place after a 3-0 victory over Italy in ice sledge hockey classification action on Friday night (14 March) at Shayba Arena.

After two scoreless periods, the Czech Republic finally got on the board just 1:34 into the third period with Zdenek Safranek’s first goal of the tournament.

The score would remain that way until under two minutes left in the third period when Michal Geier would add an insurance goal past Gabriele Araudo and put the Czech’s up 2-0. Geier would add an empty-net goal for his second of the game and seal their third victory at Sochi 2014.

“You know this fifth place is very valuable for our team,” Czech Republic head coach Jiri Briza said. “We know in Vancouver there were two teams, two top teams, USA and Canada. Now you have three teams, the Russia. So being fifth with the same guys in Vancouver, four years older when other teams have new guys on their team, it’s a great result for our team and I’m very thankful to our players.”

For Italy, it was their highest finish ever at a Paralympic Winter Games.

South Korea won their second game of Sochi 2014 and claimed seventh place overall with a 2-0 win over Sweden earlier on Day 7.

Throughout the entire game, South Korea dominated, outshooting Sweden 28-6 including not allowing a shot on goal in the second period.

Dong-Shin Jang got the scoring started for South Korea just after the 10-minute mark when he scored on the power play to give them a 1-0 lead.

The score would remain that way until the 3:16 mark of the second period when Seung-Hwan Jung would score his second goal of the Paralympics off a beautiful shot that went high on Sweden’s Ulf Nilsson.

The next time that South Korea hit the ice in Paralympic sledge hockey action, it will be on home soil at the PyeongChang 2018 Paralympic Winter Games. Four years can change a lot and South Korea hope to continue to improve before they host the big event.

"We have some quite good young players, one in particular who is 15 years old,” head coach Ik-Hwan Kim said. “We can still find more people. We just need to train hard and use this experience to be one of the leading teams in the 2018 Games in PyeongChang."

Although Sweden were held winless in the tournament, they were still remaining positive after the game.

"I'm very happy with the guys, they have all done an honourable effort down here,” head coach Jorgen Lundgren said. “Apart from in the first game against Canada (a 10-1 defeat), all teams have had to work hard to beat us, so I'm totally satisfied.”