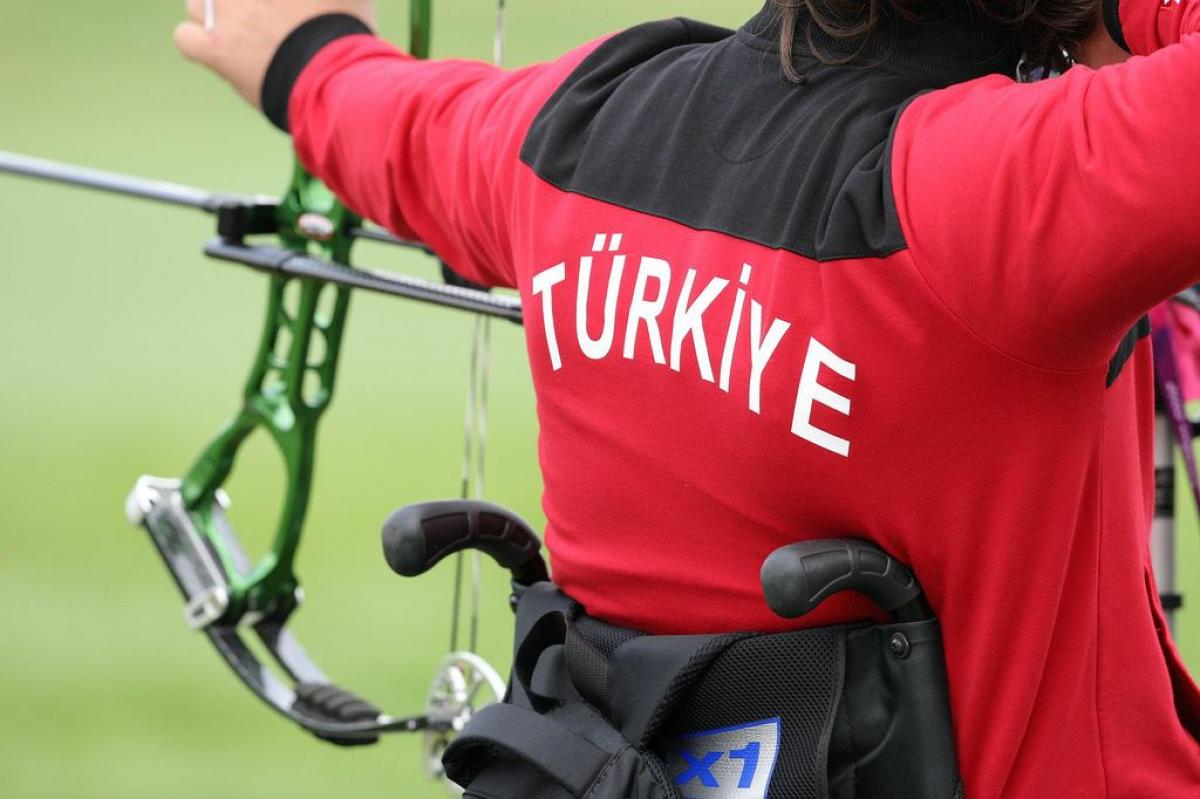 A Turkish archer gets ready to fire at the Royal Artillery Barracks.

Eric Bennett had possibly the biggest comeback of the tournament so far, managing to equalise after being 5-1 down to Joel Perrot. It all came down to a shoot off, in which Bennett prevailed.

The first day of archery quarter-finals was a nail-biting affair as many matches were decided by one-arrow shoot offs and world-class archers were forced out of the competition.

World Archery had also the pleasure to welcome Lord Seb COE, Chairmain of the London 2012 Organising Committee, in the tribunes.

Following his Paralympic record success in the ranking round, Great Britain's Kenny Allen had a disappointing morning in the recurve men standing, losing 6-4 in his elimination match against Zafer Korkmaz of Turkey. Three Russian's were in action - number one ranked Timur Tuchinov, Oleg Shestkov and Mikhail Oyun, all of whom had winning performances and survived to shoot another day in the biggest-ever Paralympic archery competition.

Phil Bottom of Great Britain was third in the ranking round and victory seemed within his grasp in the eliminations before a very high arrow, landing at the top of the one point ring, put an end to his Paralympic dream and gave Oguzhan Polat of Turkey the win.

Eric Bennett had possibly the biggest comeback of the tournament so far, managing to equalise after being 5-1 down to Joel Perrot. It all came down to a shoot off, in which Bennett prevailed.

In the Recurve Men W1/W2 world number three and ranking round number one Tseng Hu Lungi had a tight match with Great Britain's Paul Browne, going 4-0 behind before storming back to take the match 6-4.

In the recurve women standing Beijing silver medalist Fangxia Gao continued her excellent form from the ranking round, where she took top spot. Gao beat Brigitte Duboc of France to join teammate Huilian Yan in the quarter-finals. The Great Britain pair of Sharon Vennard and Leigh Walmsley had differing fortunes. Venard had a 6-2 win over Oyun-Erdene Buyanjargal to move into the top eight, while Walmsley, after a good start, lost 7-1 to Milena Olszewska of Poland.

In the recurve women W1/W2, Iran's success continued with Zahra Nemati defeating Gizem Girismen of Turkey in straight sets to get into the top four. The much-favoured Turkish archer Hatice Bayar lost to a very strong Veronica Floreno of Italy. Even though Marketa Sidkova had two misses, her arrows that hit the target were so good the match went all the way to a shoot-off which China’s Jinzhi Li won.

Finally, in the compound men W1 it took a one-arrow shoot-off to keep defending champion and world number one David Drahoninsky in the competition. Fabio Azzolini took the match to the wire but could not match Drahoninsky in the one-shot climax. Finland could have hoped for a better draw but Jean-Pierre Antonios and Osmo Kinnunun met in a very closely fought quarterfinal. In the end it was Kinnunen who came out on top 6-4.

Canada’s Norbert Murphy and Jeff Fabry finished the day with some impressive shooting that their opponents seemed to have no answer to. Murphy beat Peter Kinik 6-0 and Fabry forced the exit of the home-crowd favourite John Cavanagh, winning 7-1.