Ukraine will try to claim a third consecutive gold medal in London but they will be aware of other teams that could take their Paralympic title. 30 Aug 2012

Iran will be a team to keep a close eye on after they tested Russia in the last two World Championship finals and grasped a bronze in only their second Paralympics.

Ones to watch: Russia

The Ukrainians have won the last two Paralympic Games, beating Brazil 4-1 in Athens, and defending world champions Russia 2-1 in Beijing four years ago.

However, team captain and Volodymyr Antoniuk who competed at the last two Games feels that this years’ squad face a tough task.

“Me and my teammates will struggle for the victory,” Antoniuk said.

“I am going to do everything to defend the title of Paralympic champion,” he added.

Russia has competed in four successive World Championship finals since 1998 only losing once to Ukraine in the 2003 series.

“That’s a very good team, complete with very good players at all positions,” Antoniuk said of their gold medal rivals Russia. “They are strong competitors in all the points – tactical, physical conditioning, technical. That will be a very interesting game.”

Ivan Potekhin, the Russian team captain, believes that because of their intensive training programme and progressing development system, they can compete with the best in the world.

“Some people - like the younger players - have been playing together for two or three years, some people - like me - for 10 years. We're training all the year long, that's why, maybe, we're so good now,” Potekhin said.

Iran will be another team to keep a close eye on after they tested Russia in the last two World Championship finals and grasped a bronze in only their second Paralympics. They will be hoping that their top goal scorer from the 2011 World Championships, Moslem Akbari, is in good form if they are to improve from their efforts in Beijing.

It is because of teams like Iran that Antoniuk believes this year’s Games will be a close contest.

“Football 7-a-side is a very dynamic and interesting kind of sport to watch,” Antoniuk said. “Participants at London 2012 will play spectacular and highly competitive games which I am sure will inspire and excite all spectators.”

Although, the double gold medallist is confident Ukraine will be at the top of the podium again in London.

He said: “All participating teams worked a lot and everyone wants to win. But we hope and we will do our best to become Paralympic champions again.” 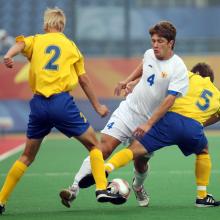 Russia takes on Ukraine in Football