Goalball gold for Finland and Japan

Finland prove far to strong for Brazil in the men’s, while Japan edge past China in the women’s 07 Sep 2012
Imagen 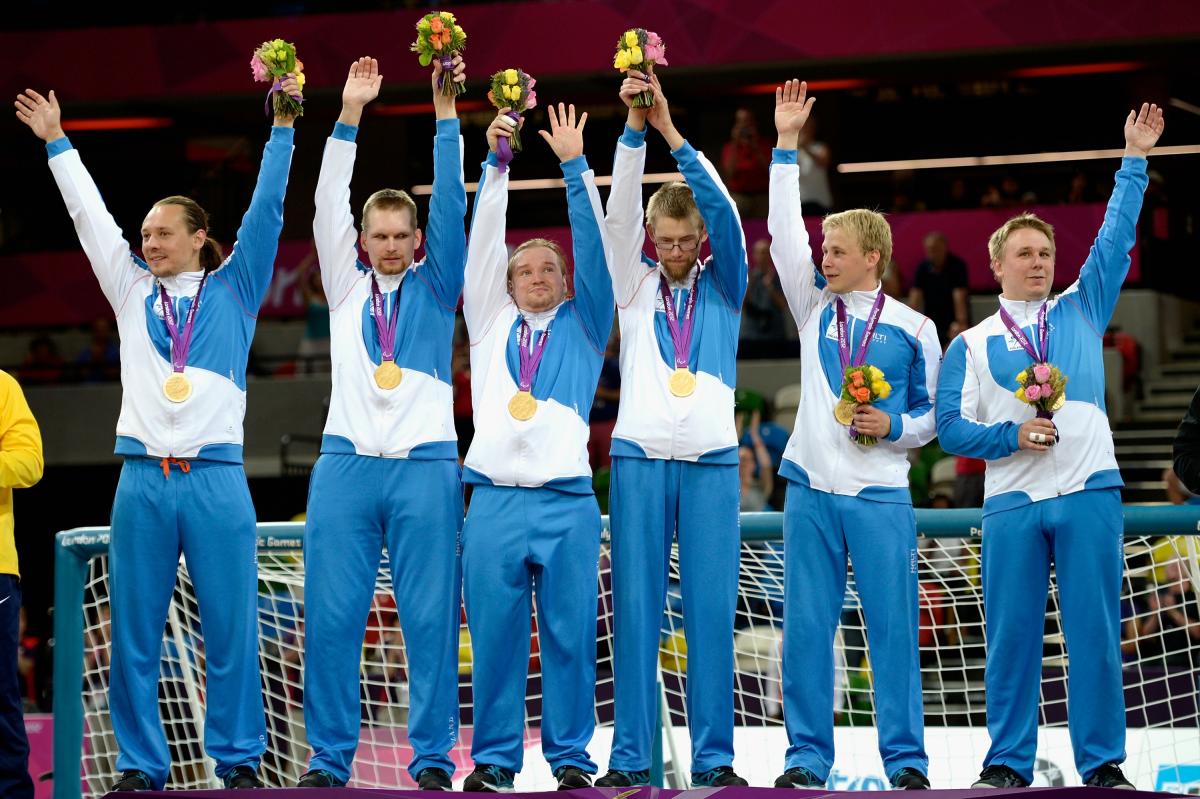 “It’s a great feeling. We did a great job. We had difficulty at the beginning of the competition but we have improved.”

Finland thrashed Brazil in the men’s goalball final, scoring eight goals, while in the women’s competition a single goal was enough to see Japan take gold against world champions China.

Brazil were hit for six in the first half, with the score 6-0 at half time, including three goals in the first three minutes from Finland.

Brazil seemed stagestruck, unable to respond to Finland’s attack. Petri Posio scored four, while Jarno Mattila scored three, taking his tally for the competition to 16. Erkki Miinala scored one. The final result was 8-1.

This is Finland’s second Paralympic gold, the last at Atlanta in 1996, with a silver in Barcelona in 1992.

After the game, top scorer Mattila said: “It’s a great feeling. We did a great job. We had difficulty at the beginning of the competition but we have improved.”

The competition’s highest goal scorer, Brazil’s Romario Diego Marques, who had claimed 23, was left unable to break through Finland’s defence, and only a goal from substitute Leomon Moreno da Silva two minutes from the end of the match spared Brazil a zero scoreline.

“We were not tired, but the two previous games were high-level games,” he said.

“After the semi-final, for today we have relaxed a lot but then it was not good. But I’m really proud of the team,” he said.

In the women’s final, Japan beat the world champions and favourites to the gold medal with a shock 1-0 win over China.

They had scored only 11 goals in the competition on the way to the final, against China’s huge tally of 37, but just one from Akiko Adachi in the fourth minute was enough to give Japan the narrowest of victories. It made her the country’s top scorer in the competition with a total of six.

After the defensive masterclass, thrilled Japan coach Naoki Eguro said: “We came here to get the gold medal so we took one game at a time and did our best."

The team had only conceded four goals throughout the competition. Eguro added: "Strong defence is our characteristic, so we made sure to reduce the mistakes we made and then to quickly go on the offence."

China were silver medallists in Beijing while Japan’s only Paralympic medal was a bronze in Athens in 2004.

China’s Wang Ruixue, who had scored eight goals for her country during the tournament, paid tribute to her opponents.

"Nothing really went wrong,” she said. “Japan's defence was just too good. It's a pity that we lost. But it has been a good experience for us.”

Top scorer Tuncay Karakaya scored all four goals in their 4-1 win, making that a competition total of 19. He could have made it six with two last-minute penalties, one given as Lithuania delayed the game when substitute Genrik Pavliukianecwas not ready to come on.

Turkey’s players won over the crowd with their entertaining manner, with Huseyin Alkan singing the Beyonce song ‘All the Single Ladies’, which has been part of the pre-match entertainment, during the game.

The first goal came in the fourth minute with a fast return from Lithuania’s throw, and a second followed two minutes later after a missed penalty. A goal was disallowed because of crowd noise, too.

Lithuania’s only goal came in the last minute of the first half, with a straight, low shot from Marius Zibolis.

Sweden recovered from the heartache of losing their semi-final in the dramatic sudden death extra throws to take a bronze medal in the women’s competition.

They overcame Finland easily with a 5-1 victory.

Sofia Naesstrom scored two goals, one in the 14th minute and a penalty in the 20th minute, to erase her nightmare of the semi-final, when she gave away a penalty in normal time and failed to find the net in the sudden death extra throws, handing Japan their place in the final.

After the match, she said: “It was hard. I was not happy with my performance yesterday (against China in the semi-final), but I am very happy today. We focused very well and we had very good defence. I think this is my last game. But it's a good way to finish."

Sweden’s Malin Gustavsson had taken the lead with a penalty in the 11th minute, her 11th goal of the competition. She also made scored Sweden’s fifth goal, a third time ball penalty in the last minute.